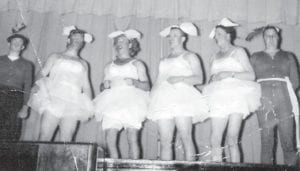 This photo, sent by Jim Boyd, was made during a program given by the faculty to raise money for a testing program at Whitesburg High School during the 1953-54 school year. From left to right are Bill Collins, Walter Enlow, Jim Boyd, Ed Moore, Cecil Caudill and an unknown teacher.

Ray Smith of Carcassonne, had to spend a night in Whitesburg Hospital a couple of weeks ago. He was having chest pains and his blood pressure was high. He had to have a stress test. I hope he feels better soon.

Berma Matthews of Letcher, has gone from a cast to boot for her leg that she broke awhile back. She is trying to get around on a walker now.

My niece Ava Abbinanti, her dad Craig, grandmother Janice Reed and Timbo Reed and his son Jacob of Whitesburg, left for Hawaii on June 10. Craig had told Ava if she made all A’s in school he would take her and she did. They came back late Friday night and had a ball. I’m so glad Ava got to go. She loved the airplane. She said Lake Michigan went on forever.

Happy anniversary to Chris and Sara Porter of Ashland; it was their third on June 6. Sara is the daughter of Virgil and Freda Combs of Carcassonne.

Happy birthday to Craig Frazier, formerly of Knott County. It was on June 10. Craig. his wife Natasha and son Jake just recently moved to Florida.

Happy anniversary to Alan and Lyn Bates. It was their 35th on June 4.

Wesley Dixon of Carcassonne, has been in the hospital with pneumonia. He had a rough time this time but is doing some better. He is the son of John and Jenny Dixon. Happy birthday to his sister Becca she turned 18 on June 14.

Happy anniversary to Keith and Laura Smith of Jeremiah. It was their ninth on June 7

There will be a benefi t show held for Andrew Allen Brady Reynolds of Isom, on June 30 at the Campbells Branch Community center from 10 a.m. to 8 p.m. to raise money for treatments for Brady. He has a rare blood disorder called chronic neutropenia. I’ll be putting it in my column every time I have news. Everyone please come out and help.

Happy birthday to Will Collins of Whitesburg. It was on June 12

Happy anniversary to David and Kate Smith Lardner of Lawrenceburg. It was their eighth on June 12.

Happy birthday to Ruby Caudill of Carcassonne. She turned 95 on June 13. I hope she had a great birthday; she is such a sweet lady.

My sympathy to the family of Travis Morton of Jeremiah. He died on Friday, June 15. Travis has been battling cancer for a long time. He was 17.

My sympathy also to the family of Shannoka Adams, 28, of Blair Branch. She was killed in a car wreck on Highway 7 on Saturday. My heart just breaks for her family. Timothy Sexton was injured in the wreck and flown out to Tennessee.

Happy anniversary to Dustin and Kendra Hays of Pine Top in Knott County. It was their fifth on June 16.

David Eldridge of Elk Creek, has had his son Matt and his girlfriend Montana Cohen in from California for a few days and to visit with Matt’s grandfather Hubert Eldridge.

Happy anniversary to Carlos and Connie Cornett of Blackey. It was their 29th on June 12.

Happy anniversary to Bryan and Bethany Maggard of Letcher. It was their second on June 13.