Many teens are abusing energy drinks 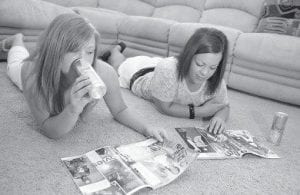 Between homework, cheerleading and working at Wendy’s, Megan Ward was tired from being always on the go. So last year the 16-year-old began drinking a Red Bull or Monster energy drink before school and sometimes a second one before cheerleading practice.

“I was trying to get energy,” says Megan, of Castle Rock, Colo. “In the morning, it gives me that extra boost to get me up and get me going. It wears off, and then I’m ready to go.”

Energy drinks, laden with caffeine and sugar, have become the beverage of choice for many teens; 30 percent say they regularly drink them, according to a 2007 report from Mintel, a Chicago market research firm, up from 20 percent in 2002. That compares to just 14 percent of adults who say they drink them.

But while teens tout the coolness, energizing factor and taste, the popularity of energy drinks among young people has raised concern among medical professionals, schools and state and local officials, who are pushing to limit teens’ access to the drinks.

At issue are the drinks’ heavy caffeine and sugar content, the common practice of mixing them with alcohol, and advertising that seems to target minors for drinks with names like Cocaine.

Principals and teachers across the country are urging parents not to send their children to school with them. Legislators from Maine and Kentucky introduced bills this year banning the sale of highly caffeinated energy drinks to minors. (Neither passed.)

In Florida, Broward County schools considered a districtwide ban after four middle school students became sick from drinking energy drinks. A 16-year-old student in Palm Beach County, Fla., died last month after consuming alcohol and energy drinks, according to her family. Investigators were awaiting the results of a toxicology report.

The FDA does not have a formal limit on the amount of caffeine that can be in foods, but says about 72 mg of caffeine is “generally recognized as safe” for cola-type beverages. An 8- ounce cup of coffee has anywhere from 75 to 300 mg, according to caffeine researcher Laura Juliano, a professor at American University.

Some energy drinks have as much as 500 mg for a 24-ounce can, and teens who drink them say they find themselves in a buzz-crash pattern.

But experts say banning the sale to minors would be tricky. Some of the drinks contain less caffeine than some brands of coffee. Red Bull and Monster – two of the most popular energy drinks on the market – each have about 80 mg per 8 ounces. A 32-ounce Big Gulp of Mountain Dew contains about 146 mg – comparable to a 16-ounce can of Monster.

“If they do put a control on energy drinks, they should also put labels on Mountain Dew,” says Darin Ezra, CEO of Power Brands, which developed and launched Go Girl Energy Drink, among others.

Still, teens report drinking several cans in a row for a continuous buzz. Some mix energy drinks with alcohol – Red Bull and vodka, for example – or consume alcoholic energy drinks, such as Anheuser- Busch’s Tilt and Miller Brewing Co.’s Spark.

“They can drink longer without feeling drunk and drink more without feeling drunk,” says Dr. Mary Claire O’Brien, associate professor of emergency medicine and lead researcher on the study. “But the take-home message is they are still drunk. They don’t think they are.”

Last year, state attorneys general from 28 states, Guam and the District of Columbia sent a letter to federal authorities warning that brewers were aggressively marketing alcoholic energy drinks to teens.

In response to such complaints, Anheuser-Busch stopped selling Spykes, an alcoholic energy drink that came in chocolate and fruit flavors. Anheuser- Busch and Miller Brewing are cooperating with state attorneys general investigating the companies’ marketing, but insist they do not target underage drinkers.

Meanwhile, the FDA came after Redux Beverages for its energy drink Cocaine and the manufacturers of a powdered energy mix called Blow, saying they were marketed as alternatives to illegal drugs. Blow is a common street name for cocaine.

Cocaine was pulled from the shelves voluntarily, had no name for several months (the can said “Insert Name Here”) and then relaunched earlier this year as Cocaine again, according to Redux Beverages founder James Kirby. The can now has an FDA disclaimer and a warning: “This message is for the people who are too stupid to recognize the obvious. This product does not contain the drug cocaine (Duh).”

Lauren Rogat, a spokeswoman for Blow, says the energy drink mix is “not an alternative to anything but canned energy drinks.” She said Blow and its attorneys believe that the drink is being lawfully marketed.

Illicit-sounding names aside, Roland Griffiths, a professor of behavioral biology at Johns Hopkins, is bothered by even seemingly innocuous ads that show energy drinks as performance enhancers. He says kids get the message that to be a better skateboarder, they should drink an energy drink.

“We don’t want to tell our kids that,” he says.

Despite the concerns, the energy drink industry is booming. There are 250 currently on the market, according to John Craven, founder of BevNET.com. In order to one up on the competition, they are raising the caffeine content, changing the formula, and coming up with catchy names, such as !.

Some teens, though, have had enough.

Autumn Maison, 19, a Michigan State University student, says she gave up her daily diet of one to two energy drinks when they started to make her sick to her stomach.

“I’m less drained,” she says. “I have less headaches. I’m less tired. I don’t have the mentality where I need to get my fix. I don’t feel right saying ‘don’t drink them.’ But I feel like it’s a better idea.”