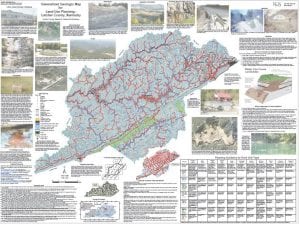 REDUCED VERSION – Pictured here is a reduction of the “Generalized Geologic Map for Land-Use Planning: Letcher County, Kentucky” which is now for sale through the Kentucky Geological Survey at the University of Kentucky in Lexington. Full-color paper copies are available for $10, and laminated versions are $15.25.

Too often in Kentucky, families have built homes on their “ideal” locations, or builders have invested in large commercial developments, only to find later that they had not understood the limitations of the soils and geology of the construction sites. That can lead to damages, expensive repairs or even abandoning a building.

A new map for Letcher County from the Kentucky Geological Survey (KGS) at the University of Kentucky has been developed to help avoid such mistakes. Because it was developed with non-geologists in mind, just about everyone can understand it.

The Generalized Geologic Map for Land-Use Planning: Letcher County, Kentucky is one in a series of such maps being developed for each county. These maps have now been completed for all of Kentucky’s 120 counties. The colorful large-format Letcher County map illustrates all of the major rock categories found in the county, along with other features such as oil, gas, and water wells, as well as landslide deposits, all of which should be considered when planning roads and buildings.

“The topography and soil conditions in the Letcher County region are conducive to landslides and subsidence, so development and construction projects should proceed carefully in some locations prone to these hazards,” says KGS geologist Dan Carey, the lead author of the map. “This map includes information on landslides and avoiding damages from them, along with all known areas of mining and other topics, such as groundwater quality.”

Each land-use map includes a “Planning Guidance by Rock Unit Type.” This section describes the major rock units in the county and their potential limitations for possible construction of roads, homes, ponds, underground utilities, and commercial, industrial, and recreational sites.

“The map is not intended as the sole basis for county-wide land-use planning or site-specific development decisions,” says Carey, who oversees the project to develop this series of maps. “But it can be very useful for alerting people to the pitfalls to be avoided in some areas. Millions of dollars a year are lost in Kentucky because of a lack of understanding of how the rocks beneath our feet affect our activities. If we can help one homeowner avoid the costs of a geologic hazard, then we feel the map will have paid for itself.”

The maps have been developed using digital data so they can be updated when new information is available or if local officials ask that additional features be shown on the map.

Photos on the map illustrate the rocks in different areas of the county, the terrain associated with some of the rock units, and how the underlying rock type affects development and economic activities. Other photos illustrate local civic sites, natural resources, oil, gas, and timber a well as water resources in the county.

The entire map can also be viewed online in “.pdf” format at the Survey’s web site, http:// www.uky.edu/kgs or http:// kgsweb.uky.edu/download/geology/ landuse/lumaps.htm.