Marc Ford, known for his work with Black Crowes, will play here October 6 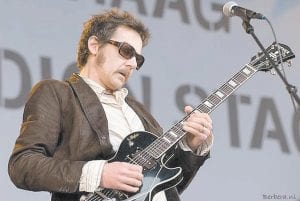 Letcher County’s Black Crowes connection will continue early next month when guitarist Marc Ford, known for his work on some of the Crowes’ most successful albums, performs at Summit City in Whitesburg. The show will take place on Monday night, October 6, at a bargain ticket price of $15. Ford, 48, was the lead guitarist for the Black Crowes on their 1992 double Platinum album Southern Harmony and Musical Companion, which reached No. 1 on the Billboard charts. He was also lead guitarist on the Black Crowes’ 1994 release Amorica and Three Snakes and One Charm, released in 1996. Ford is touring behind his new solo album, Holy Ghost, which was released in April. Tickets for the show are available for sale at www.summitcitylounge.com. Persons wishing more information may call Summit City at 633-2715 or promoter Greg Napier at 606-434-8648.