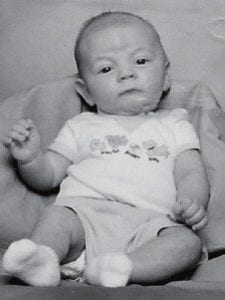 Elijah Conner Pease was born March 17 at Whitesburg Appalachian Regional Hospital to Jason Pease and Kelli Lucas. He has two older brothers, Zachary Pease, 9, and Layton Pease, 1. His grandparents are Tim and Kim Lucas of Sandlick, and Larry and Sherry Pease of Mayking. His greatgrandparents are Bobby and Madonna Pennington of Westwood, the late Della Pennington, Ollie Profitt of Neon, the late Dennis Pennington, the late Delmer Lucas, Jimmy and Ethel Wagner of Mayking, and June and Betty Pease of Craft’s Colly. He is pictured at one month old.