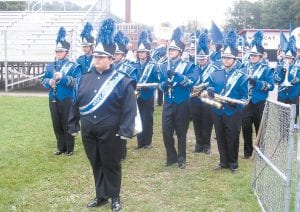 Members of the Marching Cougars band from Letcher County Central High School prepared to take the field during a band competition in nearby Pound, Va., on Sept. 19. (Photo by B.J. Johnson)

Despite sporadic downpours, the Cougar Band got its first taste of the competition season in nearby Pound, Va.

The Marching Cougars were the first unit to perform at the Pound High School Band Spectacular.

The band escaped heavy rains because of its leadoff position. Several other bands were not so lucky. Just minutes after the LCC band had left the field, the skies opened up. Three other bands had to perform in the downpours, leaving them drenched.

Lorry Sparks, the mother of Samantha Sparks—the band’s sophomore flutist—felt blessed that her daughter and the other LCC band members didn’t get soaked.

“It was really pouring,” said Sparks. “I thought oh my goodness, all those instruments are getting wet.”

Sparks was one of about two dozen Cougar band supporters who attended the event—most of them mothers, fathers and grandparents.

Spectators came prepared with their raingear. A sea of umbrellas filled the viewing stands. But the audience stayed put, showing its respect for the young students forced to march in such terrible conditions.

The crowd responded with cheers and applause during and following the LCC Band’s performance.

Dr. Jason Griffith, the band’s director, said he was very pleased with the outcome.

“I thought they did an excellent job,” said Griffith. “They have worked really hard.”

Griffith said his students will continue to refine their performance during practice sessions in the weeks ahead. The judges gave each band director a packet containing a critique of their routines.

Saturday’s event officially was not a competition, since scores and awards were not presented.

Instead, it allowed area high school bands an opportunity for a dress rehearsal before the contests begin.

Letcher Central was the only band from Kentucky to participate.

With only 10 members, the host band, Pound High School, is one of the smallest bands in the area.

The Cougar band appears to be one of the largest. It’s comprised of approximately 40 musicians and performers.

The LCC band has a busy six weeks ahead of it. Next up, the band marches in the Mountain Heritage Parade in Whitesburg on Saturday.