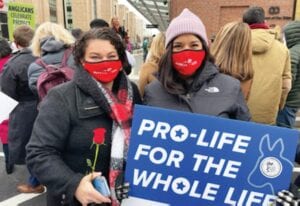 — 94th District State Representative Angie Hatton, a Democrat from Whitesburg, was in Washington, D.C., last Friday to take part in the 48th annual “March for Life.” Hatton, pictured at left, took part in the anti-abortion event as a representative of the “Democrats For Life of America.” Pictured at right is the organization’s executive director, Kristen Day, who announced that Hatton had earned the organization’s “pro-life legislator of the year” award. March for Life has been held every year since January 22, 1974, the first anniversary of the U.S. Supreme Court’s 7-2 ruling legalizing a woman’s right to abortion.