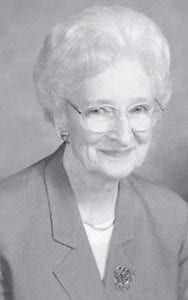 She was graduated from Whitesburg High School and attended Kentucky Wesleyan College. She was a veteran of World War II, serving in the U.S. Coast Guard (SPARS).

She was active in the Women’s Society of Christian Service serving in leadership on the local and district levels. She was a charter member of the Pine Mountain Chapter of the Daughters of the American Revolution, and while in Whitesburg an active member of the Veterans of Foreign Wars Ladies’ Auxiliary.

Funeral services were held April 17 at Park United Methodist Church. Burial was in the Sandlick Cemetery.