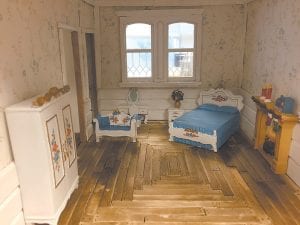 Pictured above is a bedroom from a dollhouse presented to Letcher Circuit Court Clerk Margaret Nichols by her staff a week before she announced her retirement after 28 years on the job. Nichols has had a lifelong love of dollhouses. (Eagle photo)

Although she is officially retired, Margaret Nichols was already back at her desk Tuesday in the office she has occupied for the past 28 years.

“It’s going to take a while to break the habit of coming into the office every day,” said Nichols, who caught many people by surprise when she announced her retirement from the office of Letcher Circuit Clerk last Friday.

Nichols, 71, has served as circuit clerk since January 1, 1988, just a little more than six months after she upset then-incumbent Macie Warf in the Democratic Primary Election.

Nichols said she had already decided not to seek re-election in two years, when her current term would have ended, but realized recently that “it was just time” to leave the daily grind of the courthouse so she can spend more time with her family, including her eight grandchildren.

“I’ve been thinking about this for a couple of years,” she said. “I want to be able to do things like go to Lexington and stay with my daughter some.” In October, Nichols lost longtime companion Steve Adams of Isom, who died at age 75. 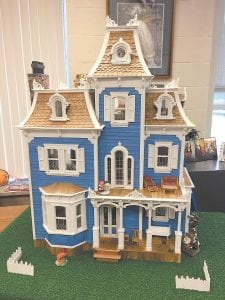 Seen in these photos above and below are a 40-inch tall by 30-inch wide dollhouse put together for outgoing Letcher Circuit Court Clerk Margaret Nichols by deputy clerks Missy Claar and Karen Day. The dollhouse kit was purchased by workers in the clerk’s office as a Christmas present for Nichols. Claar and Day, who spent parts of three months on the project, added plenty of their own touches including the furnishings and the use of popsicle sticks for hardwood flooring.

Under rules adopted by the Administrative Office of the Courts, the agency that operates Kentucky’s court system, Letcher Circuit Judge James W. Craft II will have 30 days to name a replacement to serve the remaining two years of Nichols’s current term. Craft will choose from among three people he has designated to take a special clerk’s examination, which they must pass to become qualified to hold the office. The three who will take the exam are Deputy Circuit Clerk Janet Ratliff, Court Designated Worker Mike Watts, and Letcher Circuit Clerk videographer/assistant Larry Dean Adams.

Nichols hopes the appointment goes to Ms. Ratliff, who has been Nichols’s top assistant since the two entered the office together in 1988.

Circuit court clerks in Kentucky are elected to six-year terms. They are responsible for handling all records of the circuit and district courts, ranging from adoptions to small claims. They also maintain the jury system, issue driver’s licenses, and receive money due the court. 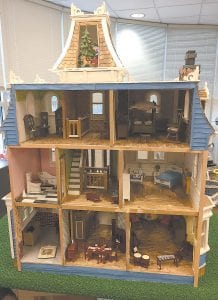 “So many things have changed so much,” Nichols said Tuesday afternoon as she reflected on her first years as circuit clerk — a time when the office was still free of computers and court dockets weren’t jammed with drug-related cases.

Nichols said she “hates to leave” the many friends she has made across the county, not only while she served as circuit clerk but also during a five-year period when she worked in the administrations of former county judges Estill Blair and Robert Collins.

“I found that if you’ll be good to people they’ll be good to you,” she said. “There were some days I would do nothing but sit and listen to other people’s problems. I feel like that’s part of the job.”

Among those whose problems she heard, said Nichols, were young people battling drug addiction and the problems that come with it. 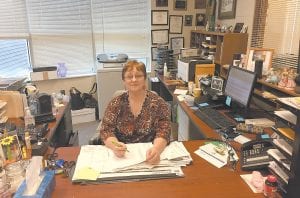 CALLING IT A DAY — Margaret Nichols, who retired from her job as Letcher Circuit Court Clerk effective December 31, was back at her desk Tuesday tying up loose ends. Nichols first won election to the office 28 years ago. Wendy Flannery of Harlan will serve as temporary clerk until a full-time replacement is appointed.

Nichols said the hardest part about her decision to retire was the knowledge she would be leaving her all-female staff behind.

Employees in the circuit clerk’s office think so highly of Nichols they all pitched in money to buy her an elaborate doll’s house for Christmas. The 40-inch-tall by 30-inchwide structure arrived as a kit and was assembled over three months by deputy clerks Missy Claar and Karen Day. The two added their own touches to the house, including their use of popsicle sticks for hardwood flooring.

“They knew I love dollhouses,” Nichols said, recalling the hours she spent as a child playing with a much smaller dollhouse of her own. “Those were the best years of my life,” she said smilingly.

The finished dollhouse was presented to Nichols during an office Christmas party on December 22, when it was rolled into the circuit clerk’s office from an evidence room located across the hall.

“They wanted to give me something to play with when I go home,” joked Nichols.

The circuit court clerk’s office is the second major elective office that is currently vacant in Letcher County.

Kentucky Governor Matt Bevin is expected any day to announce a successor to late Property Valuation Administrator Randy Hall, who died November 2. As with the circuit court clerk’s office, competency examinations are required of potential successors. The PVA exam was given in Frankfort on December 22 and passed by seven of the eight persons who took it.