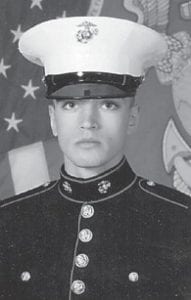 Eric Sexton, 18, of Greenville, S.C., began Marine bootcamp on Dec. 6 and was graduated March 4. According to family members, Sexton had known for a few years that he wanted be a Marine. He earned the title of expert rifleman and scored highest on the physical fitness test. Attending his graduation were his mother, Seldon Baker, formerly of Millstone; aunt and uncle, Nanetta and Mike Dingus of Neon; girlfriend, Katelynn Pitts, and her mother, Dorothy Kohl; and cousins, Mike Dingus and Jackson Day of Jenkins. His mother said this was a very proud moment in her life as a parent and she would not have missed this for the world.