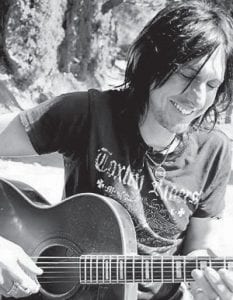 When rock guitarist/singer/ songwriter Mark Knight was last in Whitesburg, he was fronting a band of top-drawer musicians that included Gov’t Mule drummer Matt Abts and session bassist Paul Ill. While those who attended that March 15 show at Summit City were appreciative of seeing one of rock’s top drummers and a bass player who takes a back seat to no one (Ill’s work appears on Alicia Keys’ triple platinum album “As I Am” among others), it was Knight’s outstanding performance on lead guitar that drew the most praise.

While Knight’s work as a professional has always been well above average, it has been enjoyable to watch his growth as a musician and songwriter since he became the first national act to chance booking a show at Summit City — when the venue opened on July 31, 2007. Knight was touring then with fellow guitarist Mark Tremalgia. The duo performed a well-received acoustic set, but also helped pave the way for the appearance here of other national acts such as Jason Isbell, Michelle Malone, Justin Townes Earle, The Whigs and Company of Thieves.

Knight and Tramalgia had been guitarists with the Los Angeles band Bang Tango, whose single “Someone Like You” became a staple on MTV in 1989 and resulted in the group being unfairly lumped with the “hair metal” acts of that period. While his days with Bang Tango had long passed by the time Knight first appeared at Summit City, he was still honing his craft as a singer-songwriter. Knight’s artistic edge seems to have grown sharper each time a “mini tour” brings him back to Whitesburg and elsewhere in Central Appalachia. In fact, it is those twice-a-year tours that fueled many of the songs that make up Knight’s best work yet, his solo album Bone Rail Tight.

Released earlier this year, Bone Rail Tight features the work of Abts, bassist Tony Marsico (he’s worked with Neil Young, John Doe, Matthew Sweet) and Tramalgia. The album has drawn its share of critical acclaim and even captured the ear of the producers of Showtime network’s hit show “The Big C,” which included Knight’s “Poor Boy Blues” in an episode. The album also features several other songs based on Knight’s many visits from Los Angeles to Appalachia, including “Coal Miner Town,” “Rhonda,” and “Jimmy’s Lake.”

Knight has embarked on his second mini-tour of the 2011 and will be back in Whitesburg on Saturday night. Performing with Knight this time around will be Tremalgia, original Bang Tango drummer Tigg Ketler, and bassist Pedro Arevalo, who has been performing with Dickey Betts and Great Southern since 2004.