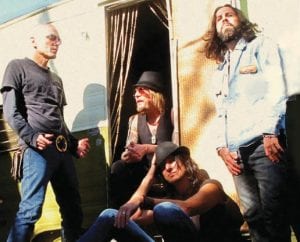 Mark Knight and Co. will perform in Whitesburg next Tuesday night.

Maybe the saddest segment of Penelope Spheeris’ documentary “The Decline of Western Civilization Part II: The Metal Years” came with a simple question to a series of Sunset Strip wannabes: “What if you don’t make it?” Each rocker had a variation on the same answer: “But I will make it.” None did.

A teenage guitarist and songwriter named Mark Knight was roaming the scene in those days, playing such legendary Hollywood hot spots as the Troubadour, opening shows for the likes of W.A.S.P. It was a magical period, if a little disconcerting at times, Knight says.

“I was 16,” said Knight, who brings his bluesy alt-rock act to Martin’s Downtown Bar & Grill on Wednesday. “I was a kid. It was actually frightening, to be honest with you. We’d go out and open up for bands like W.A.S.P., and there’d be steak and blood on the stage (laughs). We were like 15- and 16-year-old kids going, ‘Damn, (look at) these big 6-foot-6 guys with saw blades coming out of them.’

Knight was not part of “The Decline …” documentary, and he did make it for a little while, with a band called Bang Tango. The act’s 1989 debut album, “Psycho Cafe,” sold well, powered by the popular MTV video for the single “Someone Like You.”

By then, though, the L.A. metal scene was set to be usurped by Seattle’s grunge. Bang Tango drew huge crowds on the road but could not get on a major arena tour. After five years and five albums, the band’s career was pretty much over.

It was a bit of a letdown, Knight said, “but looking back on it, we did everything that you dream of.”

He kept going, with projects including a band called Worry Beads, and now with a solo project. Knight continues he tour of the south at Summit City in Whitesburg next Tuesday (March 15) to support his album, “Bone Rail Tight.” And his supporting cast is formidable. The drummer is Matt Abts, best known for his work with Warren Haynes in Gov’t Mule. Abst, an old Los Angeles friend of Knight’s, anchored the recording of “Bone Rail Tight” with bassist Tony Marsico (Bob Dylan, Neil Young, Roger Daltrey, Matthew Sweet).

For the road, Knight recruited another friend, bassist Paul Ill, who has worked with such performers as former Rolling Stone Mick Taylor. And Knight’s “partner in crime on guitars,” Mark Tremalgia, is along, as well.

“We’re all friends,” Knight said. “We’ve all done a lot of jams in L.A. and stuff together. The rehearsals are going great. … It’s sounding good.”

“The first time I went into the recording booth with him, he called me and he said, ‘There’s five things that are missing,’ “ Knight remembered. “And it was from pitch to style to technique to breathing to phrasing. I was just like, man. He just ripped me down. … At the end of the two-month recording period, he had … ironed out a lot of stuff in my voice and found the sweet spot.”

It was, Knight said, “the best hands-on training you can get.”