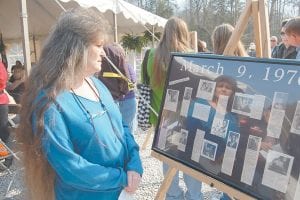 REMEMBERED AFTER 34 YEARS — Rose Kelley, of Cincinnati, Ohio, looked at a display of old newspaper clip- pings Tuesday detailing information about underground coal miners who were killed during twin explosions at Blue Diamond Mining Co.’s Scotia mine at Ovenfork in Letcher County, which occurred 34 years ago this week. Kelly was among a crowd of about 300 who attended the unveiling of a historical marker erected in honor of the 26 miners who were killed. Kelley’s brother, Kenneth “Doyle” Turner, and her cousin, Willie D. Turner, both died in the first mine explosion, which occurred at 11:45 a.m., on March 9, 1976. Kelley’s father, Grant Turner, was working in the mine that day but survived. Her brother, Claude Turner, helped recover rescue workers killed in the second blast, which occurred at approximately 11:30 p.m. on March 11, 1976. More photos of Tuesday’s ceremony can be viewed for free by following the links at www.themountaineagle.com. (Photo by Sally Barto).

It truly was a long time coming.

After 34 years, a public memorial has finally been erected near the old Scotia mine site off of Highway 119 at Ovenfork to honor the men who died in two mine explosions in March of 1976.

Respiratory Clinics of Eastern Kentucky and its parent company, Mountain Comprehensive Health Corporation of Whitesburg, submitted an application to the Kentucky Historical Society for a historical marker in honor of those who died in the twin explosions. After the request was approved by the historical society, Respiratory Clinics of Eastern Kentucky, which sponsored the marker, hosted a dedication ceremony on Tuesday to unveil the historical marker.

A crowd of about 300 attended the well-organized ceremony.

“This is the 34th anniversary of a tragic event that has shaped the lives of Letcher Countians, Harlan Countians, other people in the surrounding areas and all of their families,” said Mike Caudill, chief executive officer of MCHC. “This country and state lost 26 miners and inspectors, but the families lost 26 husbands, fathers, brothers, uncles and sons who can never be replaced.” 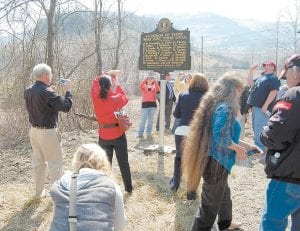 Several people who attended the March 9 ceremony in honor of those who died 34 years ago during the Scotia mine disaster took photos of the historical marker.

A load of steel rail was being delivered around 11:45 a.m. on March 9, 1976 from the portal to the 2 Southeast Main Section of the mine when the first blast occurred. The explosion, in which 15 men died, is thought to have originated when an electric spark from a locomotive, powered by batteries, caused methane to ignite in the mine. All five of the mine entries were affected by the blast.

Two days later on March 11, 1976, 11 men — eight miners and three federal mine inspectors — died in a second explosion at the mine.

Dr. Gregory R. Wagner, deputy assistant for policy with the federal Mine Safety and Health Administration (MSHA), said the families and friends of the miners who died in the two explosions, as well as the community, do not need a historic marker to remember the men who died. 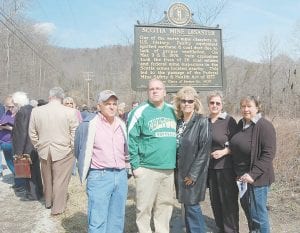 Family members of Dennis C. Boggs posed for a photograph in front of the marker. Boggs died in the first explosion on March 9, 1976. Pictured from left are Dennis C. Boggs’s brother Everett Boggs, his son Dennis Boggs, his wife Jennifer Boggs Fuller, his sister Iva Stidham and his sister Kaye Cantrell.

“We all need to remember not only the men, not only the event, but why it happened,” said Wagner. “The explosions and deaths were caused by poor decisions to keep mining with inadequate air. Production took priority over the lives of the miners producing the coal. We dedicate this historical marker so all of us remember this lesson.”

The Federal Mine Safety and Health Act of 1977 was created as a result of the Scotia mine disaster.

“Those tragic days in March are forever burned in the memory of those of us who lived during that time,” said Caudill. “Every newscast was about the explosions and those who died. Every newspaper stated in detail each new revelation. Every conversation lived and relived every aspect of the explosion, the miners and the result of the investigation.”

Caudill said for a few brief days the whole country paused and turned its focus on Letcher County and the Scotia mine disaster. 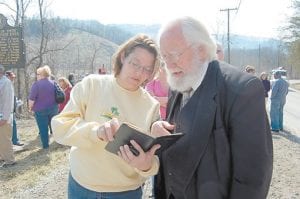 Misty Delph, of Neon, showed Rev. Wade M. Hughes on Tuesday where he had written her father Robert Griffith’s name in his diary on March 9, 1976 after he had spent the day consoling family members who lost loved ones on that tragic day. Delph’s mother, Madonna Griffith, was pregnant with her at the time of the explosion.

“Then the world moved on, leaving us to carry on and we did as we must,” said Caudill. “But what of the families, of their losses, of those derailed plans, of those wrecked dreams and the changes made to the lives of so many people forever?”

Half of the men who died during the explosions were in their 20s and had young children. Lori Brown was 16 months old, when her father Kenneth “Doyle” Turner died. Dennis Boggs was 22 months old when his father Dennis C. Boggs died. Bridgette Holbrook was three years old when her father Robert Griffith, died and her mother, Madonna Griffith, was pregnant with her sister Misty Delph.

“I understand it more today than I have had before,” said Dennis Boggs. “I wasn’t old enough to remember anything.”

Delph said coming to the ceremony to listen to people talk about the tragedy was difficult but much needed.

“It’s a blessing,” said Delph. “They are never forgotten.” 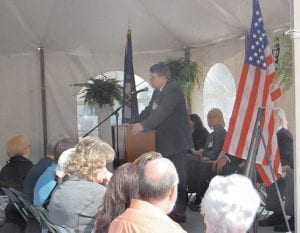 L.M. “Mike” Caudill, chief executive officer of Mountain Comprehensive Health Corporation, spoke to an audience of about 300 people at the dedication ceremony. MCHC and its subsidiary, Respiratory Clinics of Eastern Kentucky, submitted the application to the Kentucky Historical Society for the marker to honor those who died in the Scotia mine.

Brown is relieved that a marker has been created for the victims of the explosions.

“I’m glad they are finally recognizing what happened and his name could be someplace for people to see,” said Brown. “A lot of times the names get lost in what has happened.”

Rose Kelley, Brown’s aunt, lost two family members in the first explosion, her brother Kenneth “Doyle” Turner and a cousin, Willie D. Turner. She said the marker is well deserved for the miners.

“It’s a long time coming,” said Kelley. “I think this is totally awesome.”

Kelley said being at the ceremony was “hard because it brings it back even though it has been 34 years.

Brown said family members have never and will not forget the tragedy of suddenly losing loved ones.

“My mom (Debbie Turner) died in ’92 and the night before she died, she was still crying over him,” said Brown.

The first side of the marker inscription reads: “One of the worst mine disasters in U.S. history. Faulty equipment ignited methane and coal dust due to lack of proper ventilation. On March 9 and 11, 1976, twin explosions took the lives of 26 coal miners and federal mine inspectors in the Scotia mine located nearby. This led to the passage of the Federal Mine Safety and Health Act of 1977.”