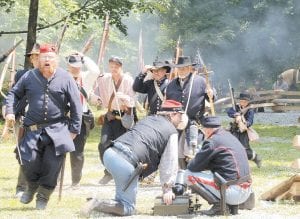 Union soldiers retreated as part of their “Napoleon Style” warfare of firing and repositioning. In the foreground, two reenactors manned an authentic replica cannon that was fired several times during the battle. (Photo by Chris Anderson)

Pound Gap of Pine Mountain, located on the Kentucky- Virginia state line overlooking Jenkins, was the scene of at least one Civil War battle — in March 1862 — and several other skirmishes in addition to being used for passage in and out of Kentucky by both Union and Confederate troops through the spring of 1864. Civil War reenactors, led by Letcher County-based Ben Caudill Camp No. 1629 of the Sons of Confederate Veterans, gathered at the Little Shepherd Amphitheater site in Jenkins this past weekend for a reenactment of skirmishes that occurred when Confederate Gen. John Hunt Morgan came through Letcher County on June 1, 1864, for his last raid on Kentucky, which ended at Cynthiana in central Kentucky on June 11-12, 1864. 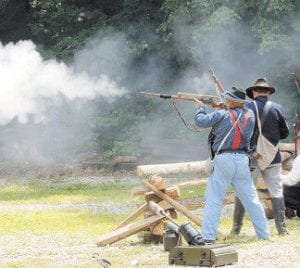 1st Sgt. Wayne Watts, US Army (Ret.), fired his rifle during a “battle” in the reenactment of Gen. John Hunt Morgan’s last raid on Kentucky. To the right of Watts is Letcher County Constable Roger “Hunky” Hall. Both men were playing the roles of Union soldiers. (Photo by Chris Anderson) 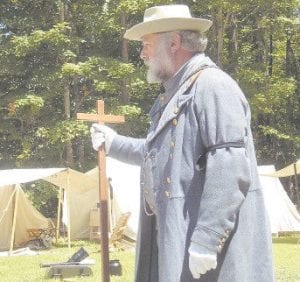 David “Butch” Chaltis, dressed as General Robert E. Lee, acted as narrator of the activities, sharing stories and experiences of those that fought in the battle over a century ago. (Photo by James Pelfrey) 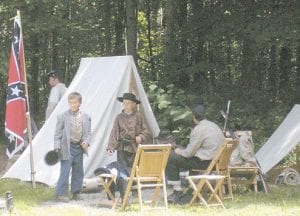 Two young boys stood outside a tent at a Confederate camp on the Little Shepherd Amphiteater site. (Photo by James Pelfrey) 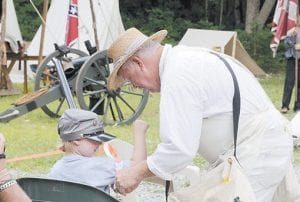 Even the spectators got to be part of the battle. Here, reenactor Ken “Doc Rat” Ratliff, bandgaged young Levi Taylor with “The Red Badge of Courage” after the battle ended. (Photo by Chris Anderson) 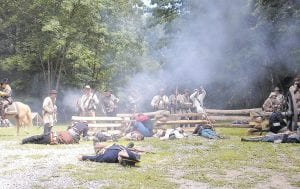 A reenactment of a battle which saw Confederate soldiers led by Gen. John Hunt Morgan turn away Union forces which were trying to capture Morgan’s troops as they entered into Kentucky. (Photo by James Pelfrey}