‘Marley & Me’ tugs at heartstrings 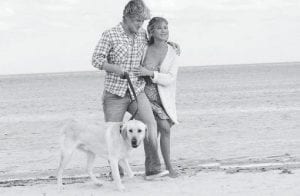 Owen Wilson and Jennifer Aniston are shown in a scene from, “Marley and Me.” (AP Photo)

Aww, look at that cute, fluffy puppy in those “Marley & Me” ads.

He’s so sweet and innocent with those pleading eyes and that shiny, red bow around his neck. It almost makes you think you’re in for a feel-good comedy about a rambunctious yellow Lab and the family who loves him no matter what chaos he causes.

Well, “Marley & Me” is all that, but if you’ve read the bestselling memoir by John Grogan that inspired the movie, you also know that it has more than its share of hanky moments. Watching all those heart-tugging stories play out before your eyes on a giant screen, though, we’re not talking about just a tear or two welling up — we’re talking grown men and women snuffling and sobbing uncontrollably, then dashing from the theater before the lights come up to avoid making eye contact with all the other blubbering saps.

Seeing the ending, in all its horrifically sad detail, is bad enough if you’re a grown-up (and a dog person). If you’re a little kid expecting a happy puppy movie, “Marley & Me” could cause serious trauma requiring hours of therapy and many scoops of ice cream to repair.

So yes, it’s effective in its ability to evoke emotion — having said that, it’s not a particularly good movie. Director David Frankel (“The Devil Wears Prada”) leaps back and forth in blandly episodic fashion between the incorrigible Marley doing wacky, destructive things and his owners, journalists John (Owen Wilson) and Jenny (Jennifer Aniston), furthering their lives as a married couple and, ultimately, as parents. And that’s a shame, because Grogan’s book was a rich, rollicking recollection of a life lived.

Here, there’s no great momentum, just a long, flat arc toward the inevitable. John and Jenny get married and, soon afterward, they get a puppy he names Marley (as in Bob). John gets a job as a reporter at the South Florida Sun-Sentinel, Marley freaks out during a thunderstorm. John’s editor (Alan Arkin) promotes him to columnist (and doubles his pay, which is just a total fantasy in today’s newsbusiness climate), Marley disembowels the couch. The first baby comes, Marley runs off on his own at the beach. And on it goes. (Surprisingly, “Out of Sight” writer Scott Frank and Don Roos collaborated on the screenplay.)

Despite their sunny, blonde looks, Wilson (at 40) and Aniston (at 39) feel too old to be playing young newlyweds starting a life together at the beginning of “Marley & Me,” and their playful marital banter seems forced. But they do settle in and have a couple of believable arguments as their characters get older and the natural stresses of marriage, a home, three kids and a torturous dog take hold. (An early scene in which Jenny suffers a miscarriage, and Marley responds with unexpected sympathy and grace, is also an emotional doozy.)

It took 22 different dogs to play Marley, though, at various ages and sizes. For that part, the casting was always perfect.

“Marley & Me,” a 20th Century Fox release, is rated PG for thematic material, some suggestive content and language. Running time: 123 minutes. Two stars out of four.