Marlow Tackett appreciates all who helped 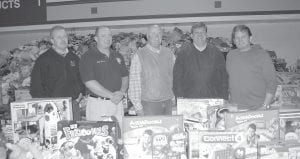 I caught up with Marlow Tackett at the recently vacated IGA store in Whitesburg Plaza on the eve of his ‘Christmas for the Needy’ program. The place was abuzz with family, friends, neighbors and volunteers. There were endless offers to help as boxes of toys, clothing and food stuff came through the door.

“ How many volunteers do you have?” I asked. “At least a hundred,” he replied, “and more are scheduled to be here tomorrow, and I will need every one of them.” He excused himself from the crowd and we retreated to his office, then he closed the door.

Marlow was visibly tired — no, exhausted. “It’s been like this for more than a month but tomorrow is the big day,” he said with a proud smile. “This is my 33rd year and I know this will be the biggest ever. This is the biggest facility I’ve ever had and the biggest collection of goods I’ve ever had.”

He sat down in a soft chair and closed his eyes.

“Go ahead and rest awhile and we can talk later,” I offered.

He continued talking softly with his eyes closed but opening them occasionally for a courteous eye contact and a smile.

This is such an irony, I was thinking. This man with the soft, hardly audible voice is the same Marlow Tackett who has entertained audiences for half a century with his booming, baritone voice when he is on the stage.

“The people of Letcher County are among the most caring, most generous people I’ve ever met, going back to four years ago when you booked me to perform at the Jenkins Homecoming Days Festival, “ he continued. “The park was full and it was standing room only. I have never felt more loved than I was that night. That event let to several more bookings in Letcher County. Then, two years ago we had our ‘Christmas for the Needy’ at the Gateway Business Park in Jenkins. There had been a terrible snowstorm and we had to get graders to move the snow so people could get there. Despite the weather we still had thousands show up for the event. It took over a week to give away all the goods we had collected.

“There are so many people I want to thank but I know I can’t possibly remember all of them. Not just businesses and churches and civic organizations but hundreds of families have carried in loads of toys, clothing and food items. Tomorrow is mostly for the kids; I want to make sure that every kid in Letcher County and surrounding counties get all the toys they want.

“I haven’t forgotten where I came from. My parents had 16 kids plus two they adopted. Life was hard but they always made sure we got something special for Christmas.

“Just look at that collection of toy,” he said, pointing through the office window. “We ask for gently used and loved toys. If anything comes through the doors that does not meet our standard, it goes to the Dumpster. The same goes for clothing and home furnishings. If they are dirty, worn, torn or broken, they go to the Dumpster. On the second day we will be giving away clothing, home appliances and the remaining toys and food items. From the looks of how much stuff we have here we may be here ‘til Christmas or New Year’s if necessary.

“I will try to mention some of the major contributors but I know I can’t remember them all so I will apologize in advance,” he said with a smile. “Keith Casebolt from East Kentucky Broadcasting raised $5,000 and came over here to Walmart and bought a truckload of new toys. He said he wanted to give not only to the Christmas program, but he also wanted to help the local economy. We don’t solicit money, we just ask people to give from their hearts and if they give us money we turn around and buy toys or food or whatever we need to stock our pantry. The Hope Foundation in Pike County sent us six tons of potatoes. Pepsi Cola of Pikeville has always been a major sponsor; they sent me a truckload of soft drinks.

“This is the first time I have been invited to a fiscal court meeting and the County Judge and all the magistrates have been very generous with their time and support. The county jailer has sent me some of his clients several times to help unload the trucks. The Letcher Central school television station gave me air time and then did a fundraiser by charging a can of food for admission to one of their basketball games. They helped get out the word to all the families and kids and there has been an outpouring of giving from hundreds of families. The Letcher County Government television station has been a tremendous help with promoting our event.

“Kevin Day and Shirley Sexton and all the folks at WXKQ radio station have been very supportive. I was on Shirley’s ‘Round Table’ program and she made me a sunshine cake. It was wonderful so I nicknamed her ‘Sunshine Shirley’. I was on Jim Webb’s program on WMMT and I was on the air with M.K. Combs at the WDXC radio station in Pound, Va. I also had an hour on the gospel radio station in Jenkins. I sang gospel songs for a solid hour.

“The Howard family including Magistrate Bobby have been especially helpful by welcoming me into their homes and their hearts. His brother Hillard and I go back a long way to the time when he was football coach at Pikeville High School and I was having my Christmas program in Pikeville. The Whitesburg City Police and the Letcher County Sheriff ’s Department have volunteered to come out and help direct traffic for us. The Letcher Fire Department has also been very helpful by collecting toys, food and clothing.

“I couldn’t possibly name the hundreds of families and volunteers who have contributed so unselfishly to this program. I will say again that the people of Letcher County are among the most generous, caring and loving people I have ever known. They have taken me into their arms and treat me like one of their own sons. I am just hoping that I can find a venue next year so I can make this a permanent program for this county.”

Marlow paused then made an emphatic statement, ”Of all the organizations, businesses and individuals who have helped make this happen, I owe my biggest thanks to the Larry Whitaker family who operate the Neon IGA Store. They made this facility available for me. I absolutely could not have put together a program of this magnitude without their unselfish support. I will be forever grateful to them.”

The same Marlow who was exhausted and dozing an hour earlier was now wide awake as he excitedly talked about his ‘Christmas for the Needy’.

“You will be here to help tomorrow, won’t you?” he asked.

He then smiled and said, “Let me sing you a couple new songs I wrote.” He took his ever-present guitar out of its case, tuned it quickly then let his fingers dance magically up and down the frets.

I closed my eyes and listened to the lyrics that could have been written only by someone who has spent most of his life here in the mountains among the family and friends he loves. I briefly reflected on my own childhood Christmases and wondered what this world would be without the likes of caring people like Marlow Tackett.