Marlow Tackett to give gifts here 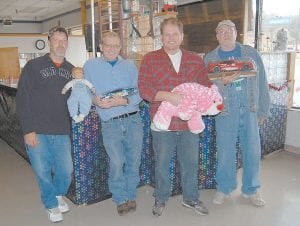 “ Marlow’s Christmas for the Needy” is set for Dec. 18 at the old Food World building at Ermine, and Tackett is counting on Letcher County residents to donate items and to volunteer.

While it is the first time the event will be held in Whitesburg, Tackett, of Pike County, has organized the event for more than 30 years and has met several Letcher County residents at his previous events.

“I’ve always wanted to come here and do this program here,” said Tackett. “I want this one to be the best one I have had.”

The even was held last year in Prestonsburg, where more than 7,000 people received items. Two years ago the event was held at the Gateway Industrial Park in Jenkins.

People from Letcher and surrounding counties are expected to be a part of the thousands who will stand in line early on the Sunday morning before Christmas.

Non-perishable food, toys, clothing, household items, furniture and appliances are needed for the event to be a success. Donations, which can be new or used items, can be dropped off at the old Food World building until Dec. 18.

“I really need the people who can help to help me,” said Tackett.

“It takes people to make this work and God will bless them. I couldn’t do this alone.”

Tackett has been organizing and performing benefi ts since the 1970s, when he began raising money for school programs. After performing at Betsy Layne High School in 1976, Tackett received a letter from a 12-year-old girl asking Tackett to buy a Christmas present for her sick mother in Floyd County. She had five young brothers and sisters and didn’t have a father.

Tackett and his sisters took the children shopping for clothes and toys. He also bought the family groceries and furniture.

The next year Tackett decided to help more families and created “Marlow’s Christmas for the Needy.” In 1977, 340 families were helped by the program. For about 25 years the event was held at Marlow’s Country Palace in Pikeville.

“I want to thank everyone who has helped me over the years,” said Tackett.

Volunteers have been busy cleaning out the old Food World building and are on site to take donations.

A stage has been built in a corner of the building. Tackett said local musicians are welcome to play music there while volunteers are organizing donated items.

“If people will help me in this county and surrounding counties, no one will go without Christmas,” said Tackett.