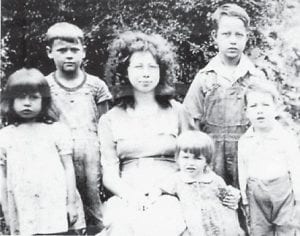 Ruth Brown, Ralph Brown, Roberta Brown, Russell Brown and Rosalie Brown are pictured in the photograph taken at Marlowe around 1946. Whitesburg correspondent Oma Hatton asks, “Does anyone recognize the boy second from the left with the striped shirt? I’d like to know. The others are the children of the late Martha and Dewey Brown of Marlowe.”

This has been a good week for me. I enjoyed a nice visit from my cousins Imogene Adkins and her brother Jim Howard and his wife Norma (Stallard) Howard of Tennessee. I hope they will come back when they can.

I saw on the Beattyville station they dedicated a song to my friend Linda Hall. It was the Howard Family of Bonnyman. I looked them to see if they were any of ours. They weren’t. They have been to sing at Millstone Baptist Church. They were a good group.

My brother-in-law Bro. Earnest Brock had surgery this week and we are all so glad it turned out well. I saw a lot of people while I was there, Bro. Elwood Cornett, a Blackey friend, and also Bro. Tim Amburgey, Andy Collier and his sister, are also Bill Blair.

Are you the one who covers couches? And did you have a birthday on Feb. 22? Someone named Bill Blair did.

Debbie Eldridge had a birthday on the 28th. Late happy birthday. Mine always seem to come early and close together. 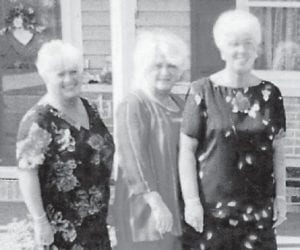 Joella Taylor Sturgill (right) is pictured with her sisters, Madonna (center) and Sharon, at a mother and daughter banquet held at her church. Since she doesn’t have a daughter, her sisters always attend the banquet with her.

My son Billy and wife Sandra had breakfast at Pine Mountain Grill on Thursdays. Dan Combs and his pretty wife Penny were there. They make such a good-looking couple. Dan saw the picture of Anna Watkins in last week’s paper. He said tell her hello for him and that she looked good. Dan still loves our Marlowe friends and he still has his house there across the road from me.

Speaking of Marlowe, my son Billy brought me a list of names of Marlowe people, 44 of them. He told me to tell Joella (Taylor) Sturgill how much he appreciated it, Facebook “Growing up in Marlowe”. I’ve got the list, of course I knew all of them. Some of them call me on the phone and guess what we talk about.

Joella’s family were our next-door neighbors when they were growing up. I remember them all. I think of them often. In fact, one of our Marlowe girls, Beulah (Delph) Cobon of California, daughter of the late Annie and Tip Delph, called Linda Hall and asked if I was sick, the reason my news wasn’t in. (No, it was icy roads.) She is a cousin of the Pennington girls, Dorthy Tacket, Pearl Noble and Linda Hall. 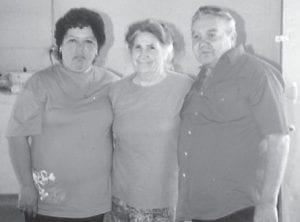 Brenda and Dexton Howard pose with Oma Hatton at a Howard family reunion held several years ago. Both of the Howards are having health problems now.

My cousin Ida Hatton called me to tell me her brother Dexter Howard’s wife Brenda (Jones) Howard was very, very sick. They live in Garrett, Ind. Brenda is the daughter of the late Orville Jones and Hester (Bates) Jones. They lived in Whitesburg.

My nephew Caleb Howard wanted me to tell my son Astor Hatton he met an old friend of his, Doug Profitt, at the funeral of Jimmy D. Spangler. Doug and Astor went to school here together and then they were nextdoor neighbors in Ashland. Great friends! Doug is a son of the late Virginia and Martin Profitt, who lived on Sandlick.

I talked with Astor a long time today. He was hearing from all these people on Facebook. He misses all his friends of Whitesburg and Ashland. He likes Georgetown, but all his neighbors work and he’s retired. His wife Rosemary is general manager at Wendy’s there. They have a beautiful home there. I hope to go see him before long. 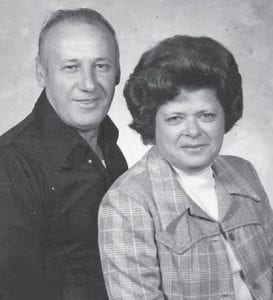 Pictured are the late Burchel and Norma Napier in 1988, Marlowe friends of Whitesburg correspondent Oma Hatton.

My four sons are getting excited about their trip to the Bristol races later this month. They’ve been going every year for a long time. They enjoy being together.

I appreciate all the nice things you say about my news. I think it is so boring. I think back to all the years I read the late Daisy Halcomb, Bonnie Adams, A.P. Williams, Sillar Brown, Sara Ison and Mary Majority. They all lived nearby and I knew all of them. I couldn’t wait for The Eagle. I think that was about all I read.

I hope we don’t have any more bad weather. But this is March. We have to take whatever and make the best of it. Later on we will be complaining about the hot weather, but just enjoy life and be thankful.

I’m going to have to be looking for old Marlowe pictures. People are asking about them and making scrapbooks. I’ve seen a lot of the pictures I’ve put in on people’s Facebook. I’m not in on that, don’t have time for it.

My son Billy says 20 people are wanting a picture of Marlowe School like the one I have from an auction. I can’t think of the woman’s name on Cowan who painted mine. I think she is the daughter of the late Bernard Banks. She lives near Cowan School. I don’t know if she does that now.

I’m sure by now you want me to hush so I will.

I just heard my cousin Ruby Jean Howard of Indiana is really sick. Please pray for her and also Brenda Howard, also of Indiana.

May God bless all of you. Try to be in church somewhere if you are able and if the weather permits. I’ve heard it will get bad overnight. Hope it misses.