Marlowe stories bring memories to many 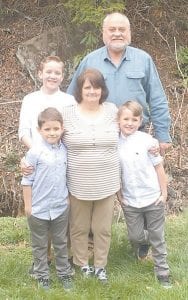 Charles Yonts is pictured with his wife Jenny Lynn Yonts and three of their four grandsons, Gage, Jude and Jace.

There are so many people I talk to that mention the column and Marlowe Coal Camp. I guess it sounds like I lived and grew up there and to tell you the truth sometimes it feels like I did because of how much I have heard about it throughout my life. But, Mom and Dad never lived there after they had children.

One of the people I talked to this past week about the column was Patty Sexton. She said she liked the Marlowe stuff the best because that’s where she grew up. She said the people she thought the most of were Wid and Thelma Banks. She said she always felt like their boys were her brothers. She said she and her brothers spent so much time with the Banks boys they were just like her family. Her dad worked in the underground mines for Wid and when he had a heart attack she said if it hadn’t been for Wid they wouldn’t have made it.

Wid called her Little Pint and one day she said she was outside and he drove by in a coal truck and asked if she wanted to ride down to the commissary, so he yells out to her mom and said, “Me and Little Pint are riding down to the store,” and off they went. She said once she mentioned to their son, Doug Banks, that she didn’t even have a picture of Wid and Thelma and Doug took one off the wall and gave it to her and it has hung in her house since. 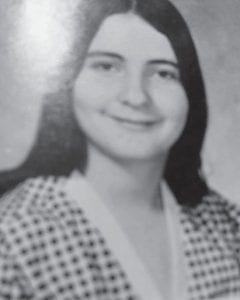 As I was leaving Isom IGA with Sunday dinners for me and Mom I saw another person that mentioned the column, Leonard Begley. Well, he didn’t really mention the column he just asked me if that dinner was just a serving, making a reference to what Dad had said about hospital dinner serving sizes. He also told me a tale that I have been meaning to tell you all and now is as good a time as any.

Daddy loved the Begley family. Leonard was helping Daddy work on his roof and as he was climbing up onto the roof Daddy just looked at him over top his glasses and said in a really low and slow voice, “Yooouuuu better be ‘cureful’ there now, you know you’re a Begley, and they’re really hard to find parts for.” I can just see my daddy saying this. 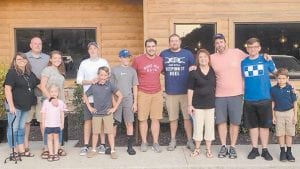 I may get in trouble for this but I want to wish my brother-in-law, Charles Yonts, a very happy birthday. It was the 23rd and I saw lots of pictures on Facebook with his family celebrating. Of all the pictures we have of you, Charles, you should be thankful this is the one I chose to put in the paper. He and his wife Jenny Lynn Craft Yonts have one son, Joshua Lee Yonts. Josh and his wife Martina have four boys, Gavin Sexton, Gage Yonts, Jude Yonts and Jace Yonts. Josh also celebrated his birthday last week.

Speaking of celebrations, the Pennington and Adams family reunion is this weekend, Sept. 1. Hopefully I can get Mom there. She hasn’t been doing much better this past week. She’s wearing a heart monitor now so we should be able to see what is going on with her heart rate. She also has a stress test being scheduled at Pikeville Medical Center. Please continue to pray for her.

Her sister Linda Joyce Hall also still needs our prayers. Lots of others: Rick Collins, Gerald Smith, Earle Bone, Bennett Combs, and I also saw on Facebook that Kernel Banks from Marlowe has been admitted to an end of life facility in Annville. Also, please remember all those who have lost loved ones recently, especially our wonderful pastor, Bill Jones, and his wife Sandy.

One of my middle school teachers, Shirley Sexton, is still asking for school memories to add to a book she is writing. She will give credit to the contributor if they want her to. One that always comes up at our house when we are telling stories on my sister Charlene is the time her bus driver, Kermit Amburgey, accidentally passed up our house on his evening run. At that time we lived in what we called then and still call “The Brown House”. It was a house on Colson that belonged to Maude Richardson and it holds so many precious memories for our family.

Anyway, that’s beside the point. When she came in the door huffing and puffing from the walk home, Daddy asked her about it and she told him Kermit forgot to let her off and then took her way down the road and when he remembered her he just let her off the bus. She replayed for Daddy how hard her walk home was. She said, “The coal trucks came by and whoosh, they would just about blow me off the road!”

Well, Kermit just lived down the road at the mouth of Cane Hollow, so Daddy went down to have a talk with him. He was fit to be tied. He said, “Kermit, what do you mean setting a little child out like that and making her walk home?” Kermit said, “Well, Marshel I just barely did pass up your house.” Come to find out it was just a few feet. But, in Charlene’s defense, she was only six years old, and to her it probably was a long way.

Once again I will end here with Oma’s weekly plea to try your best to be in church Sunday. I’ll add if your church has services throughout the week or Sunday evening God wants you there then, too.

2 responses to “Marlowe stories bring memories to many”