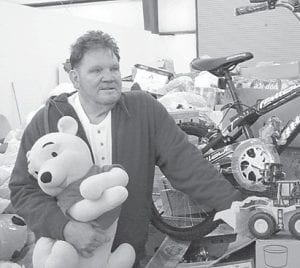 CHRISTMAS FOR THE NEEDY — Marlow Tackett is preparing for his annual event, Christmas for the Needy.

Words like awesome, incredible, and amazing come to mind when you look at the tremendous store of Christmas supplies collected by Marlow Tackett for his 32nd ‘Christmas for the Needy.’

“We have already received four tractor-trailer loads from North Carolina and we’re expecting another load from Tennessee,” said Tackett as he smiled proudly.

“Last year we received eight loads and it took until the middle of January to give it all away. As long as there are needy people, we intend to keep the program going. We accept any nonperishable foods, clothing, toys and home furnishings.

“If anyone locally has supplies to donate, they can drop them at Hometown Music at Whitesburg Plaza, or here in Jenkins at our warehouse located at the Gateway Business Park.

As we talked, Tackett recalled some of the more tender and memorable moments of the program which began by helping one family in 1976. “I remember one year I received 13 wringer washing machines still in the box from the factory. I learned that there was one family in particular which was still doing their laundry with a tub and washboard.

“I sent her word that I was bringing her one but I didn’t tell her it was a new one. When I pulled my van up in her yard and started unloading it, she was on the porch jumping up and down.

“By the time we wrestled it up on the porch and took it out of the box, she was ecstatic. She hugged me and hugged the washing machine and thanked me a hundred times then she laid her head on the machine and petted it and cried.

“On another occasion we were doing the program at the Country Palace in Pikeville. One of my big supporters there was the attorney Ira Branham. He was there to help out with the giveaway.

“There was a young mother came through who was apparently destitute. She was carrying a baby in her arms that appeared to be only a few months old. The only thing the baby had on was a diaper, no clothes, not even a blanket and it was a cold December day.

“Both looked malnourished. She asked if she could get some clothes for her baby. I told her to pick out anything she needed. She asked me to hold her baby while she filled a box with some supplies.

“I was real busy so I reached the baby to Ira to hold. Ira held the baby tenderly as tears rolled down his cheeks; you could have pushed him over with a feather.

“It is memories of moments like these that make the program worthwhile,” said Tackett.

“The official start of the giveaway is Sunday, Dec. 20, at 12 noon,” said Tackett, smiling, “but I know there will be some people here before dawn to get in line. I will need all the help I can get from individuals and groups to help administer the program.

“We will have hundreds of needy families and we need volunteers to help them find what they need. On Saturday night, the 19th, beginning at 5 p.m. we will have a celebration of the gifts. We will have many individuals and groups to sing gospel and Christmas songs and the p ublic is in vited.”

If you know of a family in need, perhaps you can bring them to the site on Dec. 20, or even at a later date to help them get food, toys, clothing or home furnishings.