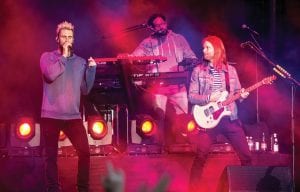 Adam Levine, from left, PJ Morton and James Valentine of Maroon 5 performing at BottleRock Napa Valley Music Festival in Napa, California in 2017. Morton is set to perform at next month’s Super Bowl halftime show as a member of Maroon 5. A week later he’ll attend the Grammy Awards, where he’s nominated for four awards, including three for his work as a R&B singer. (Invision/AP)

PJ Morton is prepping for the biggest week of his life: He’s set to perform at next month’s Super Bowl halftime show as a member of Maroon 5, and seven days later, he’ll attend the Grammy Awards, where he’s nominated for four honors — including three for his work as a R&B singer.

“You work hard and you hope for the best. But none of this is promised or guaranteed, so I just celebrate every victory,” he said. “I’m just super-grateful.”

The happiest time of his life has one dark cloud hanging above it: Controversy has surrounded the halftime show since NFL player Colin Kaepernick said he would not stand for the national anthem in protest of racial discrimination against blacks in the United States.

Morton, 37, admits he has mixed feelings about performing at the halftime show on Feb. 3 in Atlanta. Jay-Z and Rihanna reportedly said no to performing this year in protest.

“This is definitely a controversial year, but it’s something I’ve wanted to do my whole life. As musician it’s the biggest stage you could ever play,” he said.

“Our job as musicians is to provide a service and make people feel good, and I think that’s going to be our mission — just to have a good time and do what we do,” he added. “I’m excited to play on that stage, man. I watched halftime shows my whole life. I want to be there.”

The Adam Levine-led Maroon 5 will be joined at the Super Bowl by Travis Scott and Big Boi of Outkast.

Morton joined Maroon 5 as a touring member in 2010 and became an official member — the band’s keyboardist — in 2012. The group’s No. 1 hit, “Girls Like You” with Cardi B, is nominated for best pop duo/group performance at the Grammys. Morton picked up three more nominations: best R&B album (“Gumbo Unplugged Live”), best R&B performance (“First Began”) and best traditional R&B performance (“How Deep Is Your Love”).

“I had two (nominations) last year and expected less this year if I’m being totally honest,” he said. “To get three went past my expectations and made me feel like I was in the right place and doing what I’m supposed to be doing musically.”

In an interview with The Associated Press, Morton talked about the halftime show and the Grammys, which airs Feb. 10.

AP: Is the controversy around the halftime show spoiling what most would consider a big career moment for you?

Morton: It definitely did at first. It spoiled it for me because you just want to be happy and excited to play and some of the negativity definitely made it not as fun initially. But I think now that we’ve taken some time and figured out who we were in this and where we stand in this, now I’m starting to get excited about it. But yeah, it definitely was a little spoiling in the beginning.

AP: Did part of you not want to agree to perform?

Morton: There was conflict for sure. There was conflict just because of all the rhetoric and all that I’ve seen around it. I guess I had to come to the conclusion that you can be employed by a corporation and still support the things that are being fought against. I can clearly say I am against police brutality against black and brown people at a higher rate, and I am for peacefully protesting. I stand for those things strongly, but I also think there are people who are employed by the NFL, who play football every week and support what Kap stands for and those two things as well. I think we can perform for the NFL and the players can play for the NFL and we can support Kap at the same time.

AP: If PJ Morton, the solo singer, was offered to perform at the Super Bowl, would you be performing?

AP: Have you began rehearsing?

Morton: We’re putting things together. Its only two weeks away. We’re in there.

AP: Are you exciting about finding ways to collaborate with Travis Scott and Big Boi onstage?

Morton: I think one of the reasons why I’m happy to be playing the game is people don’t know that we can really play and know we can put on a show, the people who aren’t fans already. So, I’m happy to show people that we’re real musicians and going to put on an amazing show. I think it’s going to be fun.

AP: Your album, “Gumbo,” was nominated last year, and this year its live version is in contention. Why do you think this album has had so many legs?

Morton: It means a lot to me, more than any other project that I’ve done before. It took me leaving California, moving back home to New Orleans to kind of quit music and take a break from music because I was burnt out and didn’t see a way forward in music anymore for me as far as my solo stuff is concerned. So, for me to go back home and really fall back in love with music and decide, ‘You know what? I’m going to make one more record and I’m just going to make this one for myself. I’m not going to be strategic about if it sells or make things that fit the radio, I’m just going to do this for myself.’

AP: Why did you feel burnt out?

Morton: When I initially moved to L.A. after joining Maroon 5 and everything, I kind of quieted down on my solo stuff to figure out what I was doing in this new huge group that I was in. It was just a big undertaking initially. But then after it settled down and I was still living in L.A., I started to get back to myself and trying to figure out who I was. And really having all those hits with Maroon and playing these huge places and doing all these things started making me more strategic. I signed to (Lil Wayne’s) Young Money at that time, I got more strategic and tried to figure out, ‘All right, how am I going to be as big as possible and what do I have to do strategically (and) musically to make people feel me and to make me fit on the radio?’

And taking those meetings at the labels and people giving their options, it just got very cloudy for me and I started to lose sight of who I was, and I didn’t know who I was anymore. And I was just like, ‘I’ll be in Maroon 5 and chill on my own stuff.’ …That wasn’t as easy to do as I thought and thank God it wasn’t easy because I went right back to the music like I always do, and this where ‘Gumbo’ came from.

AP: You only released one album on Young Money?

Morton: I just did the one album. They call me a legend at Young Money. I signed, put out an album, and got out of my deal (laughs).

AP: Do you think you’ll stay in Maroon 5 long-term?

Morton: Oh yeah, I’m there for the long-haul. Like I said, almost nine years in. We’re going to ride it out.