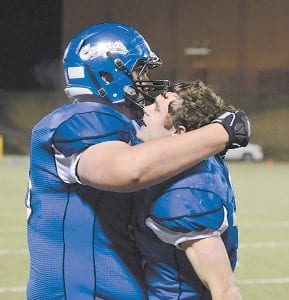 The magical 2014 Letcher County Central football season came to an abrupt end with a 55- 12 defeat at the hands of visiting Pulaski County. The Maroon defense held the state’s top-scoring LCC offense in check for most of the night and controlled the trenches in the lopsided contest.

Letcher Central received the opening kickoff and on third and one running back Jaylyn Williams broke a tackle in the backfield to gain seven yards and get the first down. The next play Zane Blair threw a 38-yard bomb to Tanner Lucas. The Cougar offense bogged down once it got into the red zone and turned the ball over on downs at the Pulaski 11 yard line.

Maroon quarterback Mason Helton connected with receiver Jake Johnson for a 26-yard gain. Then George Gregory went in motion and took a handoff around the right side for 24 yards. Letcher Central defensive lineman Jordan Boggs had a tackle for loss to force a fourth and eight that Pulaski County went for. Helton completed a pass to Johnson who was tackled just short of the line to gain.

The LCC offense went three and out. The 52-yard punt by Blair was returned 48 yards by Johnson who was tackled at the LCC 16-yard line by Hunter Hall. Two plays later Helton kept the ball and muscled his way into the end zone from five yards out. The extra point made the score 7-0 in favor of Pulaski County with 2:01 left in the first quarter.

Letcher Central could not field the kickoff and the ball was recovered by the Maroons at the LCC 23-yard line. On the first play Helton threw a touchdown to Gregory on a seam route. The point after was good and Pulaski County was up 14-0.

The LCC offense went three and out once again, but this time the Blair punt was muffed by Johnson and a hustling Letcher Central senior Marcus Baker recovered the fumble at the Maroon 37 yard line. On fourth and 10 the LCC pass was incomplete, but a pass interference call against Pulaski County gave the Cougars a first down. Zane Blair took a shotgun snap and was flushed out of the pocket and found receiver Christian Broderdorp for an 18- yard touchdown. The extra point was wide left, but LCC had cut the lead to 14-6 early in the second quarter.

Letcher Central used a squib kick and it was returned by Caleb Cox to the 45-yard line. On first down Helton was met in the backfield by Zane Blair whose hard hit caused a fumble that was recovered by LCC safety Isaiah Tyree.

LCC couldn’t get a first down on offense and punted. After a 28-yard run by running back Jaylon Conwell, Gregory scored from 33 yards out. The score was 20-6 after the extra point was no good.

The Letcher Central offense went three and out for the third straight possession and Johnson returned the punt 50 yards and was tackled at the LCC one-yard line. Helton used a quarterback sneak for the touchdown on the next play and the extra point gave the visiting Maroons a 27-6 lead at halftime.

In a classic showdown between a great LCC offense against a stingy Pulaski County defense, the first half belonged to the Maroons. They held Letcher Central to just 106 yards of total offense in the first half.

Pulaski County returned the second half kickoff to their own 21-yard line. Conwell got the handoff and was hit by Kyler Sturgill, which jarred the ball loose and was recovered by Jacob Kiser.

On fourth and eight the Cougars went for it and Blair scrambled for a 13- yard gain. LCC could get no further and eventually turned the ball over on downs.

The Maroons had a six play, 70 yard drive capped off by a 13-yard touchdown run by Helton on a quarterback keeper. The extra point sailed through the uprights to make the score 34-6 with 4:53 left in the third quarter.

Blair completed a pass to Broderdorp for a 20-yard gain. Then Blair hit Jaylyn Williams on a go route. Williams then split two defenders on his way to a 60-yard touchdown. The two-point conversion failed, keeping the score at 34-12.

Holman returned the kickoff to midfield. After a tackle for loss by Kyler Sturgill, Helton took a shotgun snap and rumbled up the middle for a 55-yard touchdown. The extra point increased the Maroons’ lead to 41-12.

The first play of the next LCC possession, George Gregory intercepted a pass and returned it 50 yards for a touchdown and a 48-12 lead, which enacted a running clock for the remainder of the game.

Pulaski County tacked on one more touchdown midway through the fourth quarter on a five-yard run by Tyler Harness to make the final score 55-12.

The Cougars ended the season with a 9-3 record and went undefeated in district play to capture the district title. Unfortunately, Pulaski County simply had more team speed and controlled both sides of the line of scrimmage.

Zane Blair completed 13 passes of 28 passing attempts for 181 yards and two touchdowns. Jaylyn Williams had 69 yards receiving on two catches and a touchdown. Tanner Lucas had three receptions for 45 yards and Christian Broderdorp had 38 yards receiving a score. Avery Stamper led the defense with nine tackles. Kyler Sturgill had three tackles for loss and caused a fumble. Isaiah Tyree had seven tackles and Quade Adams had two pass breakups.