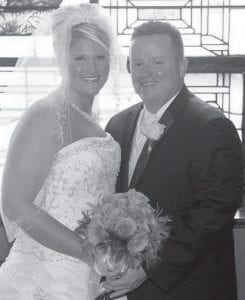 Jessica Nicole Hogg and Scott Lee Carty were married October 4 at Jenkins United Methodist Church with the Reverend Graham Abbott officiating. A reception followed at The Elkhorn Club in Jenkins. The bride is the daughter of Melissa and Roger Thacker of Pikeville and Tim and Laurie Hogg of Jackson. She is the granddaughter of Paul and Peggy Greer of Jenkins, the late Mary Pug Greer, and Wendell and Joyce Hogg of Neon. She was graduated from Eastern Kentucky with a bachelor of science degree in nursing and is employed by Central Baptist Hospital in Lexington. The bridegroom is the son of Mr. and Mrs. Adron Carty of Paris, and the grandson of the late Chester and Helen Carty. He was graduated with a bachelor of science degree in nursing from Morehead State University and is also employed by Central Baptist Hospital. After a honeymoon trip to Jamaica, the couple is residing in Lexington.