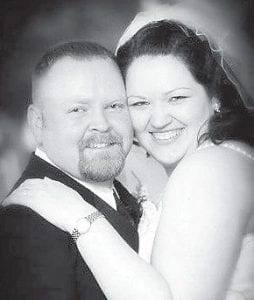 Tia RaShell Finley and Harold Eugene “Gene” Smith II were married April 4 at Pleasant Grove Baptist Church in Shepherdsville. The bride is the daughter of Mr. and Mrs. Billie J. “Jamie” Finley of Brooks, and granddaughter of Mr. and Mrs. James H. Finley of Brooks and Carolyn Smeltzer of Smackover, Arkansas and the late Leonard W. Smeltzer. She is a graduate of Bullitt Central High School and the University of Louisville and is pursing a master’s degree at Bellarmine University. She teaches special education at Mount Washington Elementary School. The bridegroom is the son of Mr. and Mrs. Harold Eugene Smith of Shepherdsville. He is the grandson of Catherine Adams Banks of Sergent, and the late Dennis Adams, Kendall Ray Banks, and Mr. and Mrs. Elmer Smith. He is a graduation of Bullitt Central High School and Coastal Carolina University in Conway, S.C. He is a U.S. Navy veteran and is employed by the U.S. Postal Service in Louisville. After a honeymoon trip to Gatlinburg, Tenn., the couple are residing in Brooks.