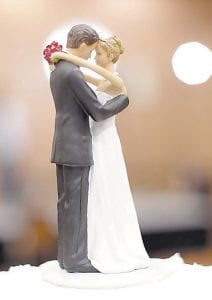 Figurines of a bride and a groom sit atop a wedding cake. A study of more than 3.5 million Americans finds that married people are less likely to suffer any type of heart or blood vessel problem. (AP Photo)

Love can sometimes break a heart but marriage seems to do it a lot of good. A study of more than 3.5 million Americans finds that married people are less likely than singles, divorced or widowed folks to suffer any type of heart or blood vessel problem.

This was true at any age, for women as well as for men, and regardless of other heart disease risk factors they had such as high cholesterol or diabetes, researchers found.

“It might be that if someone is married, they have a spouse who encourages them to take better care of themselves,” said Dr. Jeffrey Berger, a preventive cardiologist at NYU Langone Medical Center in New York.

But “we can’t prove by any means cause and effect,” he said.

This is the largest look at marriage and heart health, said Dr. Carlos Alviar, a cardiology fellow who led the study with Berger. Previous studies mostly compared married to single people and lacked information on divorced and widowed ones. Or they just looked at heart attacks, whereas this one included a full range from clogged arteries and abdominal aneurysms to stroke risks and circulation problems in the legs.

Researchers used health questionnaires that people filled out when they sought various types of tests in community settings around the country from an Ohio company, Life Line Screening Inc. Some of these screening tests, for various types of cancer and other diseases or conditions, are not recommended by leading medical groups, but people can still get them and pay for them themselves.

The study authors have no financial ties to the company and are not endorsing this type of screening, Berger said. Life Line gave its data to the Society of Vascular Surgery and New York University.

— Marriage seemed to do the most good for those under age 50; they had a 12 percent lower risk of heartrelated disease than single people their age.

— Smoking, a major heart risk, was highest among divorced people and lowest in widowed ones. Obesity was most common in those single and divorced. Widowed people had the highest rates of high blood pressure, diabetes and inadequate exercise.

The study’s results drive home the message that a person’s heart risks can’t be judged by physical measures alone — social factors and stress also matter, said Dr. Vera Bittner, a cardiologist at the University of Alabama at Birmingham.