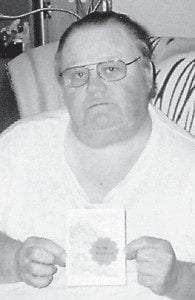 Marshall Glennon Slone, 62, formerly of Carlisle, died May 26 at his home at Kona.

He was a son of Marion Paul Stone of Kona and the late Janice Delight Ruddell, and was the grandson of the late Anna Lou Conway, Marshall Hill Ruddell Sr., Callie Cleveland Shrout, and Glennon Cash Stone.

He was captain of security for Murray Guard Security Company.

Funeral services were held May 29 at Letcher Funeral Home. Burial was in the Carter family cemetery at Kona.