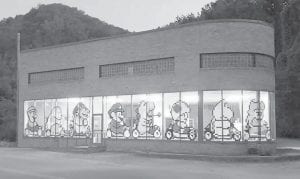 Other than the rec center, I think Letcher County did something the month of September that, in my opinion, will have a lasting impact on our citizens. They dedicated a wall in the Letcher County Courthouse for a Hero Wall.

This wall will be celebrating organ donors and recipients in Letcher County. Pictures were unveiled in the courthouse featuring pictures of both. These are true heroes that deserve this recognition.

This is also a plea to others that aren’t registered organ donors to consider it. I have thought about doing this many times because of my daddy. So, this past March when I had to renew my license I finally made it official.

When Daddy, Marshel Tacket, had a heart cath in 2001 and found out his heart was so diseased and irreparable, he immediately went to Joyce Baker, a notary public, and had his living will signed. He also went and signed up to be an organ donor. The doctors told him the only thing he had that could be transplanted was an eye. The other eye had the retina detached many years before that by a piece of wood on a turning table saw flipping up and hitting him in the eye. 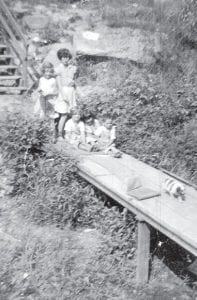 So, when he passed away at Whitesburg Appalachian Regional Hospital in March of 2004, they made preparations for a helicopter to come from University of Kentucky Medical Hospital and get his eye.

They took Dad’s body into a private room and my husband and I, along with my sister Charlene and her husband, and Dad’s sister Esther Tackett Wagner waited until they arrived.

They brought a cooler and planned on taking the eye out right there in the room. We left when they arrived.

We never knew anything else about it, until a few months later we received a letter telling us because of Dad’s eye, a blind mother somewhere in Kentucky could now see to take care of her child. We knew Dad would have been so tickled.

So, we do plan on contacting Mike Watts and having Daddy added to the donor wall. My sister, Delores, said when she was in UK with my Aunt Linda Hall, she was out walking through the hospital one night and came upon the wall there with donors and saw Dad’s name on it. 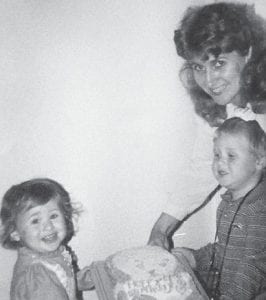 Sandy Jones is pictured with two of her children, Sam and Becky Jones Isom.

Another popular wall in Whitesburg that I thought should be mentioned was the window display by one of Letcher Elementary Middle School teachers, Mr. Tyler Watts, aka Post It Picasso. I thought this would have already been in the paper and so I didn’t put it in when he first did it. Can you imagine all the work that goes into these window displays?

I got a wonderful surprise last week. Doug Wright walked into the Letcher County Senior Citizens. He looked and sounded wonderful. His wife Pat said he had to stop taking the treatments because they were just making him so sick he couldn’t do anything. All I had a chance to do was talk to him about five minutes and I had to go. He is on my church, Letcher Independent Baptist’s, prayer request sheet and if he isn’t on yours, please add him.

I saw on Facebook Monday where one of Mom’s Marlowe Coal Camp friends was asking for everyone to be praying for her as she was planning on having surgery Tuesday the 8th. I messaged her to find out more details, but didn’t get an answer. Also, another Marlowe girl, Madonna Taylor Whipple, and her husband both need our prayers. This is the request Madonna’s sister Jo Ella Taylor Sturgill posted on Facebook:

“Please keep praying for Madonna’s husband. After I got home yesterday they had to call 911 and take him to the hospital. He is very sick and needs a lot of prayers. Please keep Sissy in your prayer. She is dealing with a lot right now and I pray she can stay strong and healthy to do all the things she needs to do for not only Don but herself also. Wish I could have stayed with her longer, but I have Darrell to care for and a lot of responsibilities here at home. Thanks for all of your prayers. Keep them coming.”

I also want to ask that you all continue praying for Laney Webb. She still has a very serious rash all over her little body and is still on a feeding tube. She really needs to start eating, but has no appetite at all. Keep this whole family in your prayers.

I also need to ask you all to pray for a really good friend of mine, Faye Martin. Her daughter said she is having migraines. Also, remember my Aunt Linda Hall and Ann Thomas in Letcher Manor Nursing Home. Our neighbor and good friend Imogene Sexton and all her children and grandchildren need our prayers.

There have been so many in our community that have passed away this past week. Remember all these, especially the family of Gerald Smith. And as always, I ask you to pray for our pastor Bill Jones and his wife Sandy.

Okay, now for a few birthdays. Helen Bates celebrated her birthday on the 5th. Amanda Sturgill, one of our No Limits Fitness trainers at the rec center, celebrated hers on the 7th. Sam Jones and his sister Becky both celebrated their birthday on the 4th. They aren’t twins, they were actually born two years apart. Their parents are my pastor and his wife, Bill and Sandy Jones.

Please remember Oma’s weekly plea, try to be in church Sunday morning and Sunday night and throughout the week.