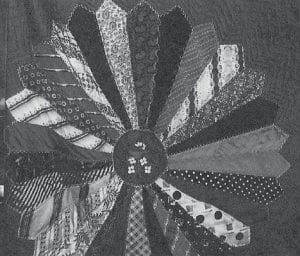 FAMILY HEIRLOOM – This beautiful quilt made of silk ties was on display at the Gibson family reunion. The quilt was pieced by Louama Gibson Banks. The center was embroidered by Geneva Gibson Caudill and it was quilted by Shirley Sigrest Harris, granddaughter of Beulah Gibson Sigrest Caudill.

I’ve been sick and haven’t been able to write my news. I had to spend several days in the hospital. I am home now and feeling better and hope to be back on my feet again soon.

On June 10, family and friends of Martha J. Hall met at her home at Ermine to celebrate her 98th birthday. Also celebrating on the same day was Martha’s young grandson, Tristen Cain Tilley. After singing the “Happy Birthday” song and eating ice cream and cake, the adults sat in the cool shade of a giant magnolia tree and laughed and told stories they remembered or had heard. The children and grandchildren had a rousing game of baseball in the side yard. It was amazing how the smaller children could hit the ball and make home runs. Everyone reported a good time and wished Martha J. Hall and Tristen many more birthdays.

On February 4, 1917, Minerva Adams was born into the family of John M. Adams Sr. and Edna Thompson Adams. She died on June 14 in Farmington, N.M. She spent her growing-up years in and around Whitesburg and taught for several years in Letcher County. Then she married Hayden Wilson and had one son, Thurman Hayden. After her husband’s death and her son grew up and married, she moved with him to the Western states – Colorado, Arizona, and New Mexico, where he worked as a forestry conservationist. A short memorial service was performed in the nursing home in Farmington where she lived. Later, her ashes will be brought back to near Crossville, Tenn., and laid to rest by her late husband, who was formerly of Millstone. Brothers and sisters who preceded her in death are Hazel Yontz, John M. Adams of Lexington, Charles Herbert of Texas, and Lucille Day of Alabama. She has one brother, David of Florida, still living and several nieces and nephews.

The week of June 25-29, Dr. T. Lee and Mrs. Phyllis Adams came from Louisville so the four grandchildren could attend for the second year in a row the Cowan Creek Music School held at the Cowan Community Center. That Wednesday night, along with their mother, Mrs. Barbara Adams, the children played for the First Baptist Church in Whitesburg. That Thursday night, they ate dinner at the home of Mrs. Ella Preston. After dinner they played their music and gave a toe-tapping, foot-patting, handclapping hour from “My Old Kentucky Home” and ending with “Amazing Grace.” Tenyear old Allison played first the fiddle then changed to a mandolin. Eight-year-old Emily played a fiddle and sixyear old Eric played one tune on a fiddle then switched to keeping time with spoons. Three-year-old Isaac tried them also. Their mother, Mrs. Barbara Adams, accompanied them on a guitar. The Adams family is very serious about their music and the girls said they’d played since they were about six. And they are very, very good! They plan to return to the Cowan Creek Music School next year. That Friday, they went home to Louisville as they were expecting their father, David Adams, to soon come home from Iraq.

On June 30, “Little Frank” Majority died at age 89 after a lengthy illness. He was the last member of Frank Majority and Ollie Fields Majority’s family. His father came from Italy and it was very interesting to listen to him tell of his experiences. He was a cousin of Dr. Mongiardo of Hazard. His mother was a sister of Corbin Fields, Nelson Fields, and Silas “Spider” Fields, who were longtime residents of Little Cowan. Frank Jr. married Patty Caudill (Patrick Caudill’s daughter); her mother was Hazel Alsip, who attended Whitesburg High School in the ’30s. Frank and Patty had two sons, Mike of Sumter, S.C., and Stephen of Whitesburg, also granddaughter Robin. He had many cousins and lots of friends. He will be sorely missed in and around Whitesburg as he took part in many activities. The police also called Frank in cases where they needed fingerprints taken when there was an unsolved crime. His funeral was held July 2 in the Letcher Funeral Home Chapel with the Rev. Jerry Utt officiating. He was laid to rest in the Nelson Fields Cemetery on Little Cowan. We send condolences to those he left behind.

The Yonts family reunion was held at McCormick’s Creek State Park in Indiana. They meet the last week of June every other year for a week. They came from as far away as Texas, New York, Tennessee, Florida, Georgia, Kentucky and Indiana. Ella and Major Sparks and Duane and Anna Yonts went from here. This is the Faris and Ada Yonts family. Everyone expressed a wonderful time. Duane and Anna Yonts have a new greatgrandbaby. Their granddaughter, Jessica Yonts Bearden, and Matt Bearden are the proud parents. They named her Maggie Elizabeth. She has a sister, Emma.

The Hop Gibson family reunion met at the Cowan Community Center on June 30. Though there was a touch of sadness over members passed on and others unable to attend, they again had a wonderful time visiting with the large family and friends. It was good to see the oldest member, Virginia Brown, present – getting around so much better with her new hip. They are happy to report continued growth. The two newest members are Emily Paige Caudill, nine-month-old daughter of Steven and Candy Caudill, and three-week-old Myles Joseph Marr, son of Mike and Janis Campbell Marr. The family wants to thank Shirley Harris of Mississippi, from copies of family history dating back to 1776, interesting stories by ancestor Martha Jenkins Adams including her experiences during the Civil War, “Memories and Reflections” of Nora Gibson Boyd, and a book of reminiscent poems by Stephen Brown. On display was a beautiful quilt made of silk ties. It was pieced by Louama Gibson Banks. The center was embroidered by Geneva Gibson Caudill and it was quilted by Shirley Sigrest Harris, granddaughter of Beulah Gibson Sigrest Caudill. Several talented family members donated handmade items for the silent auction which is always very popular.

The granddaughters of the late Bernard and Minnie Vae Banks visited the home of their cousin, Gwen Banks Handlon, for their cousin reunion in Milton. Those attending were Penny Holbrook of Taylorsville, Ind.; Beth Callahan of Advance, N.C.; Renee Stevenson of Hamilton, Ohio; Gail Brewster of Pell City, Ala.; Jill Kent of Wise, Va.; and Tori Akers of White Pines, Tenn. While visiting with Gwen, the girls attended a baby shower in Gwen’s honor. Her Aunt Carol and Aunt Tammy also attended the shower. Gwen thanks all of her cousins and aunts for coming and for all the lovely baby things.

Gail Brewster and her niece, Elizabeth, from Pell City, Ala., visited with Elizabeth’s dad, Scott Ramage, who is Gail’s brother. They also visited with other family and friends. They both enjoyed their visit and Elizabeth especially enjoyed the mountains and spending time with her dad.

Jeanette Day was in a car wreck with her daughter, Karen, and granddaughter Laura Bates. Jeanette was taken to the hospital where they checked her out and released her. We are so thankful that they were not seriously injured.

Bobby Phillips went to Florida to see his children, grandchildren, and great-grandchildren. He enjoyed spending time with his family although he said it was very hot. Georgia worked on various projects around the house while Bobby was gone.

The John H. and Mary Smith Campbell reunion was held at Linefork. Susie Campbell Ware came in from Lexington to attend. Johnny and Faye Campbell reported a good time and said they had family from as far away as Kansas who came.

Martha Ann and Mike Wenning came in for a short visit. The have sold their home in Ohio and are going to move into an apartment temporarily while Mike is finishing up their new home on Little Cowan.

Shirley and Mike Harris came in for a few days with their granddaughter, Gracee, and Mike’s mother, Helen Harris. Mrs. Harris lives in Tinsley, Miss., and this was her first visit to the mountains. She seemed to enjoy her trip. They also attended the Gibson family reunion.

Please keep Opal Froste in your prayers. She will be having heart surgery in Lexington this week. Her daughters, Judy and Stella, have come down from Indiana to help her while she recovers. Her son, Stuart Sigrest of Tennessee, will also be in Lexington with her. Her husband, Don, has been having some health problems also and his daughter, Susie, and son Phillip were here for a few days.

Ramona and Bob Caudill’s granddaughter, Hannah, spent several days with them. Her parents, Laura and Mike, came in for the family reunion and took Hannah back to Lexington and left her older sister, Cassie, to spend some time on Little Cowan. Cassie went back to Lexington with Susie Ware.

Please keep Michael Campbell in your prayers. Michael is in the U.S. Army and is currently in Afghanistan. His sister, Janis, has been compiling a book with personal messages from Michael’s family and friends. We miss him and pray that the Lord will keep him and the other servicemen and women safe. Michael was married in April and his wife is living in England with her family while Michael is away. Michael is the son of Johnny Campbell of Little Cowan.

Take care and may God bless you! I’ll try to have more news next week.