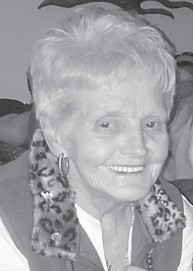 Formerly of Eolia, she was a daughter of the late William “Bud” and Margaret Collier, and the widow of Ezra Watts.

She enjoyed bowling, gardening, and her family.

Funeral services for Mrs. Watts were held May 28 in Wayne, Mich. Burial was in Cadillac Memorial West in Westland, Mich.