By WAKA TSUNODA
The Associated Press 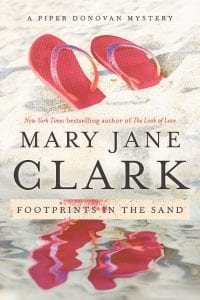 “Footprints in the Sand” (William Morrow), by Mary Jane Clark

Piper Donovan, the heroine of a mystery series by Mary Jane Clark, is fearless and inquisitive, and this trait often puts her in danger. In “Footprints in the Sand,” the latest in the series, she finds herself in a particularly lethal situation.

She isn’t a professional sleuth. A struggling actress, Piper designs wedding cakes part time in her mother’s New Jersey bakery. And every time she bakes a cake, she somehow ends up having a close encounter with a murderer.

The latest episode unfolds on the idyllic barrier island of Siesta Key, Fla., where Piper’s cousin Kathy is looking forward to glorious nuptials. But things soon start to go wrong.

Her bridesmaid, Shelley, disappears, and her blood-stained car is found. More disturbing events follow as the anonymous man responsible for Shelley’s disappearance struggles to silence any witnesses.

Who is this evil character? Is it the groom, Shelley’s one-time boyfriend? Or is it the best man, a former drug dealer? It could be anyone, including the boyfriend of the bride’s widowed mother, Kathy’s wedding planner and a local doctor with a thriving practice.

Mystery fans will have a great time trying to identify the culprit before Piper does, but the novel offers a lot more than a mystery’s usual puzzle-solving fun. Like other Clark novels, it also packs the heart-pounding suspense usually found in top-notch thrillers.

This makes “Footprints” an irresistible read with wide appeal.