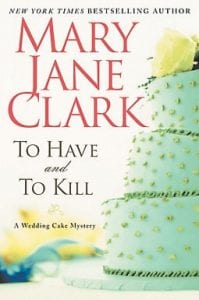 “To Have and To Kill” is the name of the new book by Mary Jane Clark. (AP Photo/William Morrow)

After giving her readers plenty of delicious shivers with her suspense novels set in the cutthroat world of TV news, Mary Jane Clark tries something new with her latest book. In “To Have and to Kill: A Wedding Cake Mystery,” the protagonist is Piper Donovan, a struggling actress who is helping out in her mother’s bakery in New Jersey.

Does this switch make the novel less exciting? Not one bit. This “Wedding Cake Mystery” is just as delectable as Clark’s bestselling thrillers like “Nowhere to Run” and “When Day Breaks.”

Piper — named after “piping icing on a cake” — is a 27-yearold who wants to succeed in show business and find true love. For now, the goal eludes her. After appearing on an Emmy-winning soap opera, “A Little Rain Must Fall,” her character is killed off. Her fiancé breaks off their engagement. She’s definitely in a downtime, but with Clark as her creator, it’s inevitable that her life soon turns glamorous — and downright dangerous.

Bad things begin to happen when “Little Rain” star Glenna Brooks, who is close to Piper, becomes engaged to Casey Walden, a teacher at her daughter’s private school. She promptly gets an anonymous note warning her not to marry him.

Piper’s FBI friend believes the note is nothing to worry about, but the first murder occurs at a fundraiser organized by Casey, Glenna and her soap-opera friends. Piper, who attends the gala and witnesses the victim’s horrible death, is further drawn into the murderer’s orbit as she returns to the “Little Rain” set for a week to play her dead character in a dream sequence.

As Glenna’s Christmas Eve wedding draws near, whoever wants to prevent it from happening appears to be getting increasingly desperate. Will Glenna survive and get to cut the three-tier cake Piper is making for her?

Suspects abound, ranging from Glenna’s jealous ex-husband to the soap opera’s rating-obsessed director. A literary magician, Clark teases readers by allowing them fleeting glimpses of the shadowy villain from time to time, but never revealing the person’s identity until the very end. Her trademark narrative techniques such as the murderer’s monologues and short, concise chapters keep suspense high and the story moving at a brisk clip.

Piper, who takes karate lessons, tweets on her Blackberry and remains optimistic in adversity, makes an attractive heroine many could easily identify with. She looks more than ready to battle psychotic killers in Clark’s future novels.