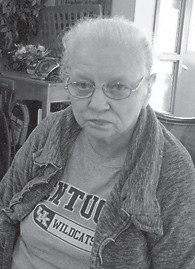 She was the daughter of the late Ernest Martin and Rosamond Curry.

Ms. Brown worked in food service the majority of her life, at Rosamond’s Cafe in Isom and the Isom Custard Stand. She loved helping prepare food for holidays and other family events and taking food to family when the urge moved her. She especially enjoyed going to flea markets and yard sales.

The family received friends and family at Letcher Funeral Home on August 31. Interment was at the Thornton Cemetery.