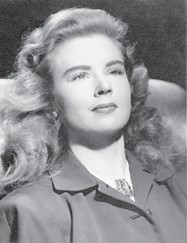 Born at Seco, she was a daughter of the late Arch C. and Minnie Thompson Jenkins, and the widow of John Edwin Passmore.

She was a past member of Graham Memorial Presbyterian Church, was graduated from Eastern State Teacher’s College. She taught typing and shorthand at Whitesburg High School from 1944 to 1946.

She was a member of Norton Presbyterian Church, Bridge Club, Lonesome Pine Country Club, and Beta Sigma Phi, and a lifetime member of the Green Thumb Garden Club and the Virginia Federation of Garden Clubs.

Graveside services were held May 3 at Sandlick Cemetery in Whitesburg. A June memorial service at Salem Presbyterian Church in Virginia will take place in June.

Everidge Funeral Home of Whitesburg had charge of local arrangements.