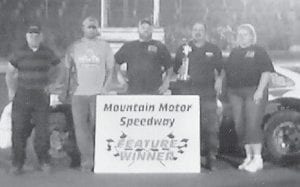 Above, driver Tim Mason posed with the members of the family of the late B.J. Bates after Mason drove his No. 45 car to victory in the B.J. Bates Memorial Race, the bomber feature.

Driver Tim Mason drove his No. 45 car to victory lane in the B.J. Bates Memorial Race, the bomber feature at Mountain Motor Speedway at Isom July 25.

The race was a tribute to B.J. Bates, who drove in the bomber class every week until his death a little more than a year ago in a four-wheeler accident.

“B.J. was a friend to everybody,” said track officials. “He always had a great smile on his face and greeted everybody with more than just a ‘hey’ and walk on. He always had a conversation.”

The race drew one of the biggest bomber fields of the season, and paid $1,000 to win.

Marty Hall drove his No. 8 car to victory in the modified fourcylinder feature, while Terry Perkins won for the second time in a row in the four-cylinder stock feature. 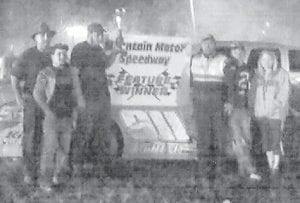