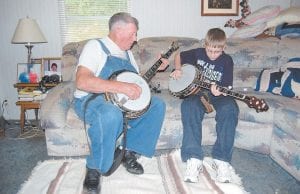 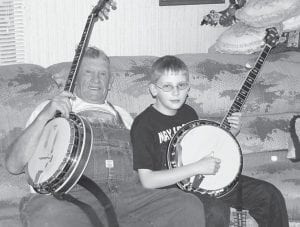 Love for playing the banjo is at the center of a unique relationship between a bashful 11-year-old boy and an 81-year-old man who is a well-known banjo player.

Jack Adams, a sixth-grader who attends Letcher Elementary School, has developed a passion for playing the banjo and has become friends with Lee Sexton, a banjo master who has performed all over the nation.

"I met this young boy here and I think the world of him," said Sexton, of Linefork, who played his banjo in the 1980 film "Coal Miner’s Daughter." "We’re big pals. I saw he was going to make a banjo player and I took to working with him."

"Jack ran out of the room crying," said Beverly Adams. "He just wanted to play so bad and he just didn’t think he could play as good as Lee."

Beverly Adams said Sexton approached Jack and said, "Come here little fellow, I will teach you how to play."

For the past 10 months Jack has paid close attention to every word Sexton tells him. Jack, who doesn’t know how to read sheet music, also intently watches how Sexton plays the banjo.

"He really loves Lee’s playing," said John Haywood, an old-time banjo picker from Litt Carr. "Sometimes you close your eyes and think you are listening to Lee."Haywood teaches Jack in an afterschool program through the Letcher County Prevention Project at Letcher Elementary School last September. He said that even though Jack plays the banjo very similar to the way Sexton does, Jack has his own style.

"He’s developed this way of picking out a tune without necessarily imitating a teacher," said Haywood. "He’s making it his own. He has developed a real unique style that reflects the age-old banjo traditions of east Kentucky."

"He’s got an extra lick that he puts in there that no one else can figure out what he does," said Beverly Adams. "He’s got his own style of playing, and he’s just a little kid."Like Sexton, Jack plays banjo in the two-finger style. Sexton said when he was eight years old he started playing the banjo with three fingers, then learned to play with two fingers after a coal mining accident years.

"I can get the same thing out of two fingers as I could three," said Sexton, whose album "Whoa Mule" is preserved in the Library of Congress.

"Jack plucks the melody up with his finger and brushes down with the strings with the rest of his fingers followed by his thumb dropping down onto the fifth string," said Haywood. "It creates that dum ditty rhythm."

Every Thursday night Sexton teaches Jack how to play about four new songs in three hours at the Campbell’s Branch Community Center. Then the two perform a handful of songs to an audience at the center.

"He’s making one good banjo player," said Sexton, who has also taught Jack how to tune a banjo. "I think he is coming along real fine to be as young as he is."

Haywood said he is amazed by how quickly Jack has advanced.

"You play him something and he plays it right back," said Haywood, adding that Jack has learned to play the banjo by ear. "… He has learned the fastest of any young person I have ever come across."

"He watches and listens — the way traditional music like that is learned," said Haywood. "He is very receptive and there is something in his blood. It’s very natural to him."

Sexton laughs when he tells a reporter that he has a hard time finding picks to fit Jack’s small fingers. Sexton also said Jack already has the ability to play with a band.

"He can tear it up," said Sexton. "He has it all but his backup work and I am teaching him that right now."

Sexton said he hasn’t been able to get Jack, who is very shy, to sing or even speak with him much. They mostly communicate with each other with their banjos, and Sexton doesn’t seem to mind. Jack will play the beginning of a song and Sexton will say the name of the song and then the two will play.

"From a teacher’s standpoint, we have learned to communicate without him saying much," said Haywood.

Sexton said Jack will talk to him freely on the telephone but not very often when they are face to face.

"He won’t talk to Lee," said Beverly Adams. "He is yet to say the first word to him. He pays attention and watches every move he makes but won’t say a word."

Beverly Adams said her son talks continuously at their home at Blair Branch and will talk to his friends at school.

After declining to verbally answer questions from a Mountain Eagle reporter, Jack answered some by writing the answers on a sheet of paper.

Jack wrote that he likes to play the banjo because "it is fun and it is easy to play." Jack said he started out playing the guitar but found the banjo to be easier.

He said in addition to playing the banjo, his interests include playing baseball, going camping and going to bluegrass festivals. He said he likes Sexton because he tells a lot of jokes and feels like one of his family members.

"He makes playing the banjo fun," wrote Jack. "He does some cool stuff while he plays. He hits the strings below the bridge which gives it a different sound."

Beverly Adams said all of her son’s grandparents have died and Jack has adopted Lee and Opal Sexton as his grandparents.

Jack also wrote that his school teachers have continued to encourage him and allow him to play his banjo at school for special occasions.

Martha Watts, director of the Family Resource and Youth Services Center (FRYSC) at Letcher Elementary School, said Jack still doesn’t talk to her at school but she can see big changes in how he interacts with other students.

"He was reserved and now he is more socially interactive with kids," said Watts. "Kids look up to him for being able to play the banjo. This is a real talent."

"I think this music was just fuel for his soul," Watts added. "It just brought out in Jack what he had bottled up for years. Without him getting involved in the class it would never be developed."

Beverly Adams said she has never seen a child enjoy music as much as Jack does.

Asked by a reporter what he wants to do when he becomes an adult, Jack started picking his banjo strings.

Beverly Adams said her son would eventually like to attend a music school to pursue his dream of playing the banjo professionally. Haywood said Jack has the potential and drive to make a living playing the banjo.

Jack earned enough money this summer mowing grass and playing his banjo to buying "a hardplaying banjo" suggested by Sexton.

Sexton took Jack to an open event at the Mountain Arts Center in Prestonsburg where the two played together on July 31. Sexton also played with Jack at a reunion this summer.

"His parents have taken him to festivals and anywhere people will let him play," said Watts. "I hope he keeps climbing that ladder. I keep telling him that you never know who is in that crowd that is listening to you so play your best."

In addition to playing at the Campbell’s Branch Community Center every Thursday night, Jack also plays his banjo every Tuesday night at the Hindman library.

On August 7 Jack played with the Vince Combs Band at the Osborne Brothers Festival in Hyden.

"Jack was so excited about playing on stage with the Vince Combs Band and getting to meet Dean Osborne," said Beverly Adams.

Haywood said Jack’s parents deserve credit for being so supportive of him.

"They come with him to practices and square dances," said Haywood. "That’s one of the reasons he is doing so good. His parents love the music just as much as him."

Jack’s father, Jeff Adams, said he has been taking Jack to the Ralph Stanley’s annual Memorial Day bluegrass festival ever since Jack was born. Jeff Adams is a die-hard fan of Ralph Stanley.

"That’s the first place he kicked when she was pregnant with him was at a Ralph Stanley bluegrass festival," said Jeff Adams. He said he also wanted Jack to learn to play the banjo because that is his favorite type of music.

"I pulled my dad’s five-string out 10 months ago and he started fooling with it," said Jeff Adams. "I didn’t expect him to pick it up as quickly as he did."

Haywood said he has seen Jack sitting in the passenger seat of his mother’s Buick playing the banjo while she drives down the road.

"He doesn’t hardly put it down," said Haywood.

"He’d play anywhere, everywhere," said Beverly Adams. ""If he’s not playing it, he’s listening to it. I bet that kid doesn’t watch 30 minutes of TV a week."

(A video clip of Sexton and young Adams playing their banjos together can be found at www.themountaineagle.com)