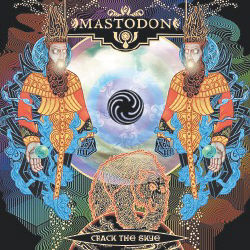 Shown is the cover of “Crack the Skye,” the latest album by Mastodon. (AP Photo/Reprise)

Following their acclaimed major label debut, 2006’s “Blood Mountain,” Mastodon offers another challenging concept on “Crack the Skye,” this one focused on out of body experiences, astral projection and Rasputin’s assassination in Czarist Russia.

It may sound like a bit much to the casual listener, but such daring artistry had all but vanished from the metal scene for years until the recent emergence of bands like Lamb of God and the eclectically manic Mars Volta.

The opening trio of “Oblivion,” ”Divinations,” and “Quintessence” set the tone for the album’s centerpiece, the mind-numbing four-part suite “The Czar,” which may leave you gasping through its 11 minutes. And that’s nothing next to the 13-minute closer, “The Last Baron,” which is nothing short of masterful.

The disc will lose its punch when taken in pieces — but if you’ve read this far you know treating Mastodon as anything less than an album band would be a grave mistake.

CHECK THIS TRACK OUT: Offering a touch of everything, from soft vocals and screams to softer guitar harmonics and punishing riffs, the disc’s title track will tell you all you need to know about Mastodon.