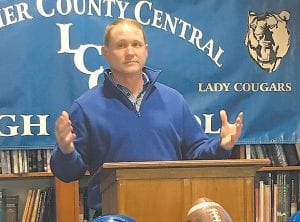 Junior Matthews, 45, of Whitesburg, was introduced as Letcher Central’s head coach Friday in the LCCHS library. He thanked football players, school staff and the community for the support and warm welcoming he has received.

“All these voices of support and love, I appreciate,” he said.

Matthews has been an LCCHS assistant coach for four years alongside previous head coaches Mike Holcomb and Paul Rains. For the past five years, Matthews has been the head coach of the Letcher Central Middle School football team, which consists of students from Arlie Boggs Elementary School and Cowan and Whitesburg middle schools.

“I think knowing these kids is a real advantage for me,” said Matthews. “I know who can play and what they can do. Every kid has something they can offer, a skill to help the team.”

Matthews has coached some of the freshmen class since they were third graders in Pee Wee football.

He said he will use legendary college basketball coach John Wooden’s Pyramid of Success as a teaching tool to help his football players become the best versions of themselves.

“I think there are so many lessons and so many great things these kids can get from our program that will carry them the rest of their lives,” said Matthews. “It would be a shame if all we talked about is how we are going to block, tackle and try to win a game. We are going to talk about how we carry ourselves in victory and defeat. We’ll talk about how we sacrifice for our teammates and how we sacrifice for our team.”

Strength and conditioning will be a vital part of the program for the next few of months, he said. Spring practice begins mid-April.

Matthews was a running back for Whitesburg High School from 1985 until 1989. He played football one year at Eastern Kentucky University. Matthews was graduated from Morehead State University.

He and wife, Missy, have two children, Eli and Isaac.