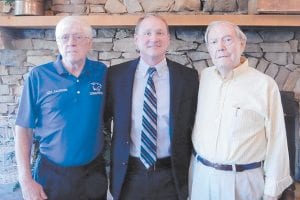 Coach Matthews began his football career at Arlie Boggs Elementary where he played during his middle school years. He played four years as tailback for the Whitesburg High School Yellowjackets. He attended Morehead State University and graduated in 1994. His coaching career began in 1997 under Coach Doug Chandler. He has coached football at the youth, middle and high school levels here in Letcher County. Coach Matthews is a certified public accountant and is married to Missy Childers Matthew and they have two sons.

Coach Matthews shared with Rotary members some of his plans for the football program this year. His goal is for young men to have a positive experience playing the game and to develop not only as players but as young men who will give back to their community. He sees being head football coach for LCCHS as an opportunity for him to give back what he has been given over the years through the guidance and direction of individuals such as Coach James Gose, Coach Doug Chandler and Ozz Jackson. He says he feels the game of football can provide the environment needed for players to learn about courage, leadership, responsibility, service to others and the bond of friendship between teammates. He concluded his remarks by saying, “At the end of the day, what’s important is whether we are making a positive impact.”