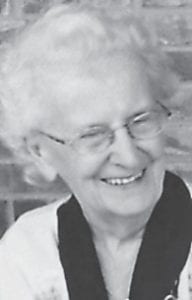 Born at Craft’s Colly to the late Wilson and Sarah Jane Webb Franklin, she was the widow of Everett Hall.

She was the former owner of Mattie’s Market, a retired merchant, a member of Wheelwright Freewill Baptist Church in Wheelwright, and a charter member of Order of Eastern Star #477.

Funeral services will be held at 11 a.m. today (Wednesday) at the Wheelwright Freewill Baptist Church. Burial will follow in the Buckingham Cemetery at Bevinsville.