His playing time dropped when Philadelphia got its full roster healthy, but former Kentucky guard Tyrese Maxey has not complained because that’s just not what he does.

“People love him,” said Amy Fadool Kane, Emmy award winner sports/anchor report for NBC Sports Philly. “This is a pretty rich basketball area. I didn’t know that as much until I moved up here, but they have a really good basketball tradition and they appreciate a player like Tyrese.”

Kane, a UK graduate, was thrilled when Maxey fell to the 21st pick in the 2020 draft and the 76ers got him. Philadelphia fans were not as happy.

“Some of them had ill-conceived notions about his shot, but I had written a piece about I knew he would not be there when the 76ers got a pick but if he was, they should take him. He’s made me look like a genius,” Kane said.

He’s been as popular off the court as he has with his play when he’s been on the court.

“He has so much personality as UK fans know,” Kane, a former WKYT-TV sports reporter, said. “He just fits in so well here and is an excellent player, too. Fans here love guys who perform well on and off the court like he does. 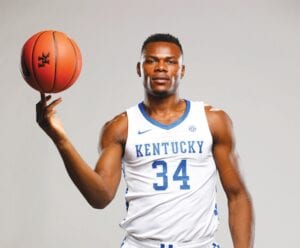 Oscar Tshiebwe’s size and physicality make John Calipari wish he could play for UK now instead of next season. (UK Athletics Photo)

“He is fully comfortable being here and says Kentucky prepared him well for this. He just wows people. They are enamored with him. You can see that on my (social media) timeline during 76ers games and when he exploded for 39 points against the Nuggets it was insane.”

Through 26 games, Maxey was averaging 8.7 points, 2.0 rebounds and 1.8 assists per game and shooting 45 percent from the field, 29 percent from 3-point range and 87 percent at the foul line.

Kane said Philadelphia fans were used to “unanswered hopes in the draft” and that made them cautious about Maxey.

“They have a lot of unfilled hopes,” Kane said. “The nickname for her is Neg-a-delphia. Fans have been let down by teams so much. It is a long-suffering fan base that is very cautious. People wondered why he was projected so high in the draft and then fell to 21. “He only shot 29 percent from 3 (at Kentucky) but I told everybody here to take it from me, somebody who watched every minute he played at UK, that he could shoot. If a guy can shoot free throws, he can shoot. I saw he was an 83 percent free-throw shooter, so that should tell you all you need to know about his shooting.

“Here he has shown he not only can shoot but can shoot well and shoot often if needed. He can play off the ball. He has opened a lot of eyes. I don’t think anyone was ever really down on him. There was just some cautiousness, but he has answered everything with affirmatives. This is a blue-collar town and they love guys who play defense and run and do that extra effort stuff. They love him.”

Maxey was her first guest on “1-2-3-4-5 Sixers” and that was her first time to interview him since there was limited preseason access to all players.

“He sits down and is wearing a UK shirt. He said he wears his UK stuff all the time. That was like a real insight to who he is and how he carries himself. I liked the kid right away,” Kane said. “He is so poised and polished for 20 (years old) and does not just say stuff to be saying it. He gives a lot of really good responses and people are able to see what he is like and see his lighter side.

“He is always smiling, always working. Those two qualities get you far in this league. In the middle of the season you have to have a positive attitude. You have got to have guys like that on the team.”

“Jim is really impressed with Tyrese. He sees things from a coaching/GM perspective. He sees him as a real building block and all-star level player for this team,” Kane said. “He likes that he can play point guard and two guard. Jim says if you can play two positions and create your own shot you can have a very good NBA career. That’s why he said the kid is going to be an all-star.”

West Virginia transfer Oscar Tshiebwe was scheduled to start practice with coach John Calipari’s team this week. Calipari’s only regret — he is not eligible to play and add his physical presence to the team now.

“When I see him and his body and his toughness and his – I’m like, ‘Is there any way? Is that transfer rule immediately? Can we do that now? Can he come and play now?’” Calipari said.

“But he’ll start practicing and we’ll get a chance to see where he is. It’ll be good for these kids to have to go against him every day just because of physicality and athleticism and quickness to the ball and all of that stuff.”

Kentucky native Anna Maria Tarullo is sports director at WOWK 13 News in Charleston, W.Va., and said UK is “already stacking up wins for next year” with Tshiebwe on the roster.

“He’s a front-court presence who can play facing the basket. He will draw defenses in on him and create shots and rhythm for other players. He’s got a bigger build and is more physical than players Cal has had,” she said. “He goes back to a guy like Karl-Anthony Towns with his size and strength.

“And if you are not making 3-point shots, he’s going to rebound. He’s going to be tremendous and playing for Cal should be great for him.” s

Vince Marrow spends a lot of time recruiting for the Kentucky football team, but if you are at a Lexington Catholic boys basketball game the rest of this year or the next two seasons, odds are you might see the UK associate head coach there.

His brother’s grandson, 6-8 John McCrear, is now living with Marrow and played his first game for Catholic last week at Lincoln County. McCrear transferred from Ypsi Prep Academy in Michigan where he played with Emoni Bates, the No. 1 rated player in the 2022 recruiting class.

“Kenny just told me it was a great school and great place to play basketball,” Marrow said. “I respect what he says a lot. At Lexington Catholic he will be more than just a basketball player and will have a chance to grow as a young man.

Marrow likes the potential Mc- Crear has and expects him to keep growing. Marrow has coaches calling him already wanting McCrear on their summer teams.

“It’s kind of different for me to have coaches sort of recruiting me,” Marrow laughed and said. “We were actually going to make this move with him last year but as a family we decided now was the time to do it.

“He loves being in the Big Blue Nation. I am really excited about his future and what he will be doing.” s

Any time he gets a chance to watch the University of Kentucky play basketball, Scott Padgett watches the team he helped win the 1998 national championship.

Padgett is in his first season as an assistant coach at New Mexico after he was head coach at Samford from 2014-20.

He admits not being a head coach is “different” for him.

“For six years you were making the schedule, calling the meetings, going everywhere. Now I am looking at the phone waiting for calls to tell me what to do,” Padgett said. “I would love to be a head coach again but right now it is kind of nice just to focus on basketball and helping guys get better because the last year at Samford was rough.”

Padgett says he’s learned a lot that he didn’t know when he became a head coach even though he was a graduate assistant one year under John Calipari at UK and was an assistant coach for two years at both Manhattan and Samford. He spent seven years in the NBA and played in 448 games before starting his coaching career.

“ You never stop learning,” Padgett said. “I really had been in this business for only four years when I got my first head job. If I knew what I know now maybe things would have been a lot different and hopefully there will be a time I get a chance to be a head coach again and use all I have learned.” s

Quote of the Week: “Everyone on our current team, and the majority of players on any team, played another sport in high school. Being multi-talented in a big deal with footwork and game sense. The best softball players are multi-dimensional because they are not so wrapped up being in the (batting) cage but just playing sports in general,” UK softball coach Rachel Lawson on the value of playing multiple sports in high school.

Quote of the Week 2: “ Look what he’s done, look at the consistency of his program. His guys never get in trouble, they all do the right thing, they all come back and give back, they all leave the program and are among the most philanthropic people in the NBA,” ESPN analyst Seth Greenberg on coach John Calipari.

Quote of the Week 3: “They both were drafted later than I thought. I thought they’d both go in the teens, but they dropped. They learn to share at Kentucky and be great teammates,” Kentucky coach John Calipari on Immanuel Quickley and Tyrese Maxey in a New York Post interview.