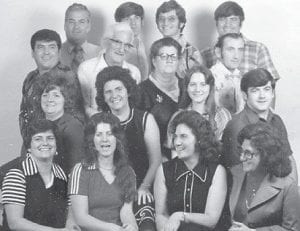 HOWARD FAMILY — Pictured is the family of the late Cindy and Bill Howard. Two family members are deceased, Eddie Howard and Della Pennington. Their sister, Whitesburg correspondent Oma Howard, says, “We miss them so much.”

Hello everyone, hope you are all happy and doing well. It’s such a pretty today (Friday). It has sure been cold at night and early morning and they say we are to have rain on Saturday, in time for poor Hillard’s ball game. Maybe it won’t rain.

This was a good week, I’ve heard from so many friends.

I enjoyed breakfast at Pine Mountain Grill a few days ago with my sons Billy and Larry Hatton. Billy was talking with a man and he asked me did I know any Halcombs from Linefork. I told him they were our kinfolk. The man was Phillip Halcomb, son of the late Ezekiel Halcomb, cousins of ours. His aunt was the late Cindy Halcomb, whom my mother was named after. I knew all his family and I sure did enjoy talking about old families. He lives in Hopkinsville. He had a cousin with him, I forgot her name. She lives on Linefork. She’s supposed to send me some pictures. She gets The Eagle so I’m reminding her.

I enjoyed talking with Anna Osbourne of Virgie. She seems so nice.

I’ve talked to my sister Joann Brown in Indianapolis, Ind. She had a migraine headache. I sure hope she is feeling better.

I was watching the Beattyville TV station the other night and one of our old Marlowe friends, Vernon Noble, was playing gospel music with his group. They were really good. I think they got some pledges from the Pennington girls, Linda Hall or Dorthy Tackett.

I got a nice card from my grade school friend, Ada (Miller) King in Miamisburg, Ohio, and one from Ruby (Adkins) Caudill in Lexington and also a card from Lillian (Brown) Buford of Lexington.

I got a call from Gladys Smith of North Carolina, who writes for The Eagle. She’s getting a lot of work done on her house.

Emma Lou Engle, I ran into your sister Anna Lea in the parking lot at Walmart. She’s been having a lot of fun with her grandchildren. I think she said she had even been roller skating with them.

My granddaughter Angie (Hatton) Mullins will be having a birthday next week.

My sister Judy Greene called. She lives in Frankfort but they were going to Somerset to check on their house there and to get some winter clothes since winter looks like it’s on its way.

I got a call from Lisa Taylor of St. Louis, Miss., the other day. She’s into family genealogy. She had a picture of Clyde in his Navy uniform and we found out her grandfather Edward Taylor was Clyde’s cousin. He spent some time with us in the early ’70s. We had never met him and he wanted to meet some of his relatives and we sure enjoyed his visit. He also met a lot of his relatives here.

I was glad to have some friends from Indiana, Betty Asher, daughter of used-tobe neighbor, the late Beulah Hall, who I still miss, and Beulah’s sister Novake Banks, who once lived on Cowan.

Steve Brewer, I heard you wrote some nice things about Clyde. I usually read your news, but I missed that. I’m going to look for a back copy if I can find out the date.

I heard Patty Majority was having some health problems. I hope she is doing better. I always sat with her and Lizzie Mae Wright at the Ermine Center. I’m anxious to get started back going up there and going on some of their trips.

I miss going to Hazard with Betty and Bertus Tyree. They were sure good to me and made the trips better. I hated to go by myself. I hope I wasn’t a burden on them. Also, my sister Louise Shepherd and Joyce Howard were so good to go every time I asked. I love all my family and I never wanted to be a bother to them. I hope to make it up to them any way I can. I hope they know they can call on me any time if they need me.

I really appreciate all my friends who have been so good to me. I’ll never forget them.

May God bless all of you. Try to be in church somewhere this week. There will come a time you’ll need them.