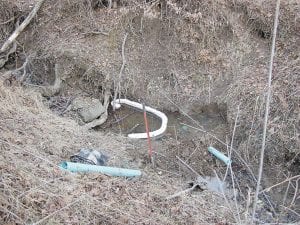 A diesel fuel leak which led to a non-consumption water advisory being issued this week for nearly 4,000 water customers in Letcher County has been traced to a leaking storage tank at Mayking.

What is believed to be a relatively small amount of diesel fuel began finding its way into the North Fork of the Kentucky River on Saturday, the day after the tank rolled onto its top and into a drainage ditch beside an old L&N Railroad track.

The tank is located on property owned by Childers Oil Company of Whitesburg, and is one of several waiting to be cut up and sold as scrap metal. Workers hauled the tank to the site on Friday. The fuel had been stopped from flowing into the river by Monday afternoon.

State officials on Tuesday said they were waiting for results from additional tests before recommending that customers resume using water manufactured by City of Whitesburg for anything other than toilet flushing. The Kentucky Division the agency was working with the city water plant to resolve the problem.

A non-consumption advisory is issued when there is a possibility that consumption of water produced by a water treatment plant may be harmful to human health.

This week marked the second time since November there have been issues with drinking water in the county.

"In the words of Yogi Berra it is déjà vu all over again," said Whitesburg Mayor James Wiley Craft. "It is the same situation, but I don’t think it is as quite as severe as the first time."

In November, Whitesburg restaurants were not allowed to serve dine-in meals because the health department was not allowing hand washing in restaurants. That rule has changed this time around.

This week, restaurants weren’t being allowed to cook large meals, but could serve hot dogs, hamburgers and other sandwiches on disposable plates with plastic utensils, according to Anthony Garrett, senior environmentalist with the Letcher County Health Department. Restaurants must also have a potable water source in rest rooms and supply hand sanitizers.

While about 2,000 customers were affected by the water emergency in November, Letcher Judge/Executive Jim Ward said more county residents were affected this time because the affected water had already moved from Whitesburg to holding tanks at Sandlick and Cow Branch and on to Jeremiah.

"This is certainly frustrating for citizens to have to go through this again," said Allison Fleck, communications director with the Division of Water.

"The first time we get a clear sample we are good to go," said Craft.

Ward said officials were better prepared to handle the current water emergency than the one in November.

"As soon as we found out we started rounding up water," he said.

Ward said that until the advisory was lifted the county would continue distributing free drinking water each night until 10 at the Colson Senior Citizens Center, Cowan Recycling Center, Letcher Fire Department and the county garage at Mayking. Ward said the water was donated for distribution by Childers Oil and by Wal-Mart.

Free water was also being distributed at Whitesburg City Hall each night until 9 p.m.

Updates on the water advisory are being posted on the county government’s web site at www.letchercounty.ky.gov.