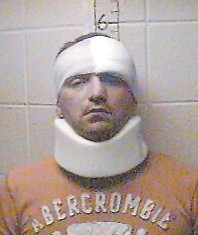 Jeremy Shane Ritchie has been held in the Letcher County Jail since he allegedly caused a multi-vehicle accident at Ermine on Feb. 25 while driving under the influence of intoxicants.

A 28-year-old Mayking man has been charged with committing 23 crimes in connection with a recent car crash at Ermine.

According to a report filed by Kentucky State Police, Ritchie was driving north on US 119 at 12:50 p.m. on Feb. 25. Ritchie told police that he had just pulled out from an intersection and fell asleep while driving and did not remember the accident until he was getting out of his vehicle and saw the other vehicles involved.

The report said Thomas B. Cline, 42, of Wytheville, Va., was driving south on US 119 when Ritchie suddenly drove across centerline directly toward him. Cline said he attempted to swerve onto a shoulder to avoid being hit head-on, but Ritchie struck a cattle trailer Cline was pulling, causing him to lose control and hit Lorine Stambaugh, 40, of 230 Chopping Branch, McRoberts, who was stopped while waiting to pull onto the road.

Stambaugh told police that while she was waiting to pull onto the highway, she saw Ritchie cross over into Cline’s lane and strike Cline’s cattle trailer. Her vehicle rolled back into a parking lot after being hit by Cline’s vehicle.

Rhonda Johnson, 30, of 588 Brushy Fork Road, Jenkins, told police she was driving south on US 119 and was directly behind Cline when Ritchie crossed the centerline and struck Cline. Johnson said that when Cline’s vehicle was hit, it ripped the rear tires from the cattle trailer and caused one of them to strike her vehicle, after which she swerved onto the shoulder to avoid being hit by Ritchie. Johnson said she lost control of her vehicle and slid into the parking lot of the Blair Business Mall at Ermine, where she hit a parked sports utility vehicle owned by Billy and Julie Rose, of 365 Golf Course Lane, Whitesburg. Julie Rose owns Mountain Medical Equipment Inc., which is located in the Blair Mall.

In a second indictment, the grand jury accuses Ritchie of complicity to obtain a controlled substance by fraud or deceit and being a persistent felony offender.

The grand jury says Ritchie, acting alone or in complicity with William Bentley and/or others, attempted to obtain a controlled substance under false pretenses.

The grand jury also indicted two other persons last week. They are:

• Nathan Osborne, who is charged with burglary, sexual abuse, sexual misconduct, and unlawful transaction with a minor.

Osborne, 19, of P.O. Box 881, 10512 Right Fork Road, Pound, Va., is accused of entering a home at Gray’s Branch in Jenkins and “subjecting” a 15-year-old to sexual contact and sexual intercourse. The crimes allegedly occurred between Sept. 10 through January 31. The mother of the 15-yearold testified in the case.

The grand jury says Toler, also known as Linda Ann Dingus, 29, of #1 Bottom, House 13, Jenkins, did not exercise reasonable diligence in caring for a three-year-old and a two-year-old on March 8. She is also charged with possessing the narcotics oxycodone and methadone, and the anti-anxiety drug alprazolam.