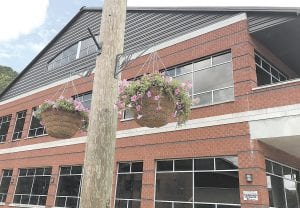 CITY BEAUTIFICATION — Twin baskets of flowers like these are now hanging from nearly every telephone pole and light pole in downtown Whitesburg. The project was completed about two weeks ago. (Eagle photo)

A group of Mayking residents from the “old golf course” community visited the Whitesburg City Council meeting this week to request that the city consider extending city sewer lines to include their neighborhood and others in the vicinity.

Retired attorney Peyton Reynolds acted as spokesman for the group that included about a dozen residents, and said that when the city had extended water lines to serve their community, a clause in the water service agreement stipulated that after 15 years, the residents could request sewer service.

Reynolds said that a significant number of his neighbors want sewer service and he believes that residents of a trailer park across the North Fork of the Kentucky River and some others in that area would like access to city sewer services as well. Reynolds’s wife Rebecca added that at least 30 people have indicated to her that they would join the city as sewer customers.

Whitesburg Mayor James Wiley Craft said that the state had funded the extension of water and sewer lines to the state highway garage, and while the water lines continue to the Mayking area, the sewer line terminates at the garage. However, City Manager Chris Caudill added that when the line was laid, the contractors made provisions for the sewer line to add more customers by leaving a four-inch connection at the garage.

Craft said he would have Caudill and City Engineer Paul Nesbitt of Nesbitt Engineering get together with Reynolds and try to determine how many potential customers can be added and come up with a cost analysis. He told Reynolds and the other interested parties they should speak with their neighbors and urge them to join in the effort. Nesbitt added that usually when a grant is written for sewer line extensions, funding is built in for homes along the route to have a hookup without a tap-on fee. But if they choose not to at least have a tap installed, even without actually hooking on to the line, it can cost as much as $7,000 to install a tap at a later date. Caudill said that when the city extended lines to the Whitco area where he lives, subsequent tap fees for people who did not go ahead and get on during the line installation had cost even more. Mayor Craft said he would like to be able to extend sewer service to the golf course residents and if it is feasible, the city will proceed to try to secure finding.

In other business, the council voted to approve the first reading of Ordinance 2019-05, which leaves the city’s tax rate for real and personal property at $.34 per $100. Mayor Craft said the rate has been unchanged for at least five years, and if necessary he will call a special meeting to get the tax rate in on time.

Craft also informed the council that the lease agreement with Kentucky Mist Distillery is finalized. The agreement allows owner Colin Fultz to purchase the building that houses the distillery at any time during the renewable five-year leases. The original agreement had called for him to purchase the old Kyva Motor Company building within the first five years, but Fultz asked the city to modify the lease to allow for more flexibility.

Councilman Mike Jackson told the council that this year’s Ride for Hope, a motorcycle tourism and fundraising event sponsored by Mountain Comprehensive Health Care and Appalachian Regional Healthcare, will be moved to downtown Whitesburg. Jackson said the event raises money to buy gas cards to help defray the cost of travel for chemotherapy patients.

Jackson said that for the past two years, the bikers had gathered at the overlook at the top of Pine Mountain on US 119. This year, they will assemble at the Kentucky Mist Distillery at 1 p.m. on Saturday, August 24, to celebrate the official opening of the Kentucky Mist Loop, a 132-mile motorcycle ride that will be listed on a popular touring map published by Wild Mountain Rides of Bean Station, Tenn.

Jackson said that approximately 300 riders will ride the Kentucky Mist Loop, which goes through parts of Letcher, Perry, Leslie and Harlan counties, and return to Whitesburg. Riders from Morristown, Tenn., to Pikeville will participate, and food vendors will be onsite as well. The council voted to close Main Street from City Hall to the distillery from noon until 4 p.m. for the Saturday event.

Caudill, the water manager, reported what he called the usual business of water leaks and pump repairs, and said an approximately 80-foot section of water line across from Long John Silver’s on Route 15 will need to be replaced. He added that one pump station will require a new pump that will cost between $3,000 and $5,000, depending on the brand. It is also time to re-order the odor suppressant the city puts into sewer lines to keep smells down. The cost of the order suppressant will be $8,880, but Mayor Craft said that it is money well spent, considering the misery the odors caused for the residents of Whitesburg before the city started using it.

Craft also announced that the city has purchased a new excavator from Whayne Supply for $62,100. He said the old one is about worn out and the city must have a working excavator. The agreement with Whayne calls for a six-year finance period. Craft also raised City Clerk Jessica King and Assistant Clerk Donna Perkins, along with Chris Caudill, for the beautiful flowers that decorate downtown Whitesburg. He said he has ordered two four-foot-high fountains to be placed on two-foot pedestals at each end of City Hall. The fountains will have lights and water. The flowers and fountain were paid for by the Area Development Fund, a fund sponsored by the Department of Local Government and administered by the Kentucky River Area Development District.

The annual Oktoberfest will be held on October 19 from 3 until 9 p.m. There will be food, drinks, and music. Main Street will be close from Roundabout Records to the courthouse for the event.