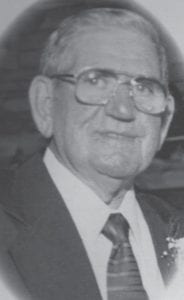 The Hogg family of Letcher County has established an endowed student scholarship fund at Southeast Kentucky Community and Technical College (SKCTC) in memory of the late Maynard Clifton Hogg. Funds to endow the scholarship were given by the family and by numerous friends, who made gifts to the college’s scholarship fund in Mr. Hogg’s memory. The scholarship will be awarded annually to a student enrolled in an allied health program on the college’s Whitesburg Campus.

Mr. Hogg was one of the founders of the Whitesburg Education Development Foundation that helped bring a SKCTC branch campus to Whitesburg in 1989 and continues to support the campus today. According to SKCTC President W. Bruce Ayers, Mr. Hogg’s leadership and dedication to the college and its students played an important role in the founding and the expansion of the Whites- burg Campus, which now has three buildings serving more than 700 students.

Mr. Hogg was a past recipient of the SKCTC President’s Service Award, which is given to an individual who has provided extraordinary service to his/her community. In addition, the Whitesburg Campus’ Allied Health Building is named in Mr. Hogg’s honor.