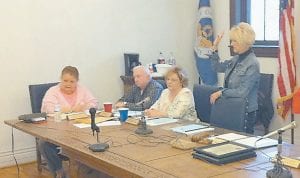 Emotions ran high at the April meeting of the Whitesburg City Council Tuesday night, as council members and citizens said goodbye to late Councilman John Williams and welcomed his wife Earlene to serve the remainder of his term.

Williams, who died March 30, was one of the longest serving and most beloved members of the council. He also served the community in a number of other capacities. In addition to volunteering with the Whitesburg Fire Department, he was an active member of the First Baptist Church of Whitesburg and the Masonic Lodge.

Mayor James Wiley Craft told the council it was his duty to declare seat held by Williams vacant and said he had asked Earlene Williams, his wife, to fill the vacancy.

The council voted unanimously to accept Craft’s recommendation and Mrs. Williams was sworn in. She said she was honored and humbled to accept the position. She also talked about the outpouring of love she and her family had received from city residents.

Craft then asked Water Maintenance Director Chris Caudill to read a resolution honoring Williams that was issued by the Kentucky State Senate at the request of 29th District State Senator Johnny Ray Turner, who represents Letcher County. Caudill presented plaques issued by the Senate to Mrs. Williams and both of her daughters as well.

In other business, Caudill also told the council that it had been an eventful month for the city water and sewer works. He said that both pumps are down at the Letcher County Vocational School sewer lift station and neither can be repaired. Caudill said it will cost $6,044 to purchase new pumps and that a rented diesel pump is being used until they can be replaced.

Caudill also said a wastewater pump is down and will cost about $3,000 to rebuild. He said the pump can be rebuilt, while a new one would cost $6,244. Caudill added that the damaged waterline across the Kentucky River at Ermine is still “hanging in there” and is in one piece.

The council also voted to allow the Fleming-Neon Middle School Dance Team to conduct a 5K run as a fundraiser in the city on May 9.

Police Chief Tyrone Fields asked that he be notified about the route the race will take a couple of weeks before the event so he could make sure the runners will be safe.

Mayor Craft also welcomed back Councilmen Larry Everidge and James Bates, both of whom had missed recent meetings because of illness.