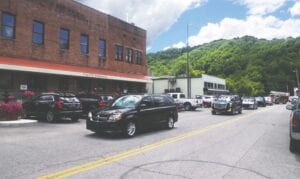 A first-call van was followed by numerous city vehicles as the body of late Whitesburg Mayor James Wiley Craft was driven past City Hall on Tuesday afternoon. (Photo by Sam Adams)

Whitesburg Mayor James Wiley Craft, who shepherded through the legalization of alcoholic beverages and a payroll tax, replaced aging water and sewer lines, oversaw the acquisition of the recycling center from the county, and boosted tourism through special events and city beautification projects died Tuesday after a long illness. He was 76.

Funeral services for Craft will be held at 1 p.m. Friday at Letcher County Central High School. Visitation, which will also be held at the high school, will be held Thursday night from 6 until 9.

Craft was first elected Mayor of Whitesburg in November 2006 and took office in January 2007. One of his first orders of business was a petition for a wet/dry vote in the city, a move many considered political suicide and sure to fail. Letcher County was voted dry in 1943 by a margin of just 16 votes, then confirmed it with a second vote in 1946. There had been just one wet/dry election since, in 1948, when dry forces prevailed in Jenkins. 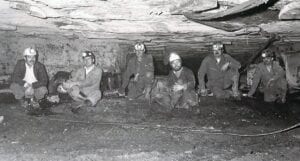 WHEN HE WAS A YOUNG PRACTICING ATTORNEY, Whitesburg Mayor James Wiley Craft (far left) visited with coal miners inside the old South- East Coal Company underground mine at Polly. This photo was taken by Bill Richardson after Craft won a case for South-East and the miners.

But Craft took on the measure openly and with gusto. Unlike previous attempts in which petitions were gathered and disappeared, Craft campaigned for people to go to businesses and sign the petition. By April, just four months after he took office, Whitesburg voters approved of alcohol sales in restaurants by more than a two-to-one margin.

“It will mean a big increase in revenue for the city itself and will attract people here to eat that don’t usually come to Letcher County,” Craft predicted in 2007, when Las Peñas Mexican Restaurant poured the first legal drink in Whitesburg in more than 60 years.

Craft’s prediction proved prescient. The move is credited with a boom in downtown Whitesburg, with buildings that had previously been empty suddenly filled by local restaurants and other businesses. 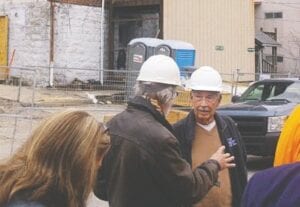 Five years later, Craft spearheaded another wet vote that expanded the law to allow package sales, and in 2016 expanded sales to be made on Sunday. Following the success of the Whitesburg vote, Jenkins also voted wet.

While the vote here was controversial and drew the ire of some churches, the vote wasn’t close, with the vote to expand sales again passing by a two-to-one margin. The week of Craft’s death, there are 17 restaurants in the city limits, six of which serve drinks, and a locally owned craft distillery with locations in Whitesburg, Myrtle Beach, and North Myrtle Beach, South Carolina, and Ocean Beach, Alabama.

Also somewhat controversial was Craft’s move to create a payroll tax in the city. Though criticized by some, the ordinance passed, doubling the city’s resources, which had already improved because of a tax on alcoholic beverages. With the increase in revenue came new police cars, new water and sewer lines, and the purchase of three historic buildings that were deteriorating. While both the Salyer’s Building and the Daniel Boone Hotel eventually suffered roof and floor collapses, the city repurposed the shells. The Salyer’s building is now the “Harold D. Bolling Veranda,” leased by the city as a place for patrons at downtown restaurants to picnic. The city has also received grants to stabilize the century-old Daniel Boone Hotel in preparation for returning it to use as a boutique hotel. 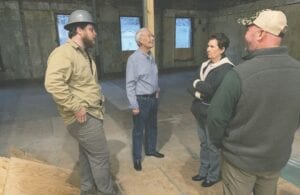 Whitesburg Mayor James W. Craft, second from left, was among the city officials who visited the old DANIEL BOONE Hotel in March 2020.

Craft first effort at saving a historic Whitesburg building began in May 2007, when he took action to delay the issuance of a work permit that would have demolition to begin on the old KYVA Motor Company building on Madison Street. Three years later, the Whitesburg City Council and the Letcher County Conservation District agreed to a trade that gave ((Continued from the city ownership of the old KYVA building, which was constructed in 1925, and the conservation district a building site for its new headquarters now located on former city-owned property in West Whitesburg.

The KYVA building was later remodeled and is now home to the successful distillery operated by Kentucky Mist Moonshine.

Craft’s work was so wide-ranging, the city council eventually voted to make the mayor a full-time position with a salary commensurate with the duties.

During his time as mayor, Craft also improved the city’s park system, including Tanglewood Trail. The trail was begun three mayors before with the purchase of the old L&N Railroad right-of-way, and Craft oversaw the paving many improvements to the trail, which now extends from the Upper Bottom neighborhood to the west end of town. A further expansion undertaken in conjunction with the Letcher County Tourism Commission is expected to open soon, leading from the Upper Bottom through the old L&N Railroad tunnel beneath the hospital driveway, and circling back to Riverside Park and the railroad bridge leading back to the Bottom.

Craft also oversaw construction of a walking bridge in downtown Whitesburg that spans the North Fork of the Kentucky River near the Letcher County Courthouse and connects two city parking lots and a walking trail that follows the old L&N Railroad bed to West Whitesburg. The bridge was later named in honor of former city councilman and Vietnam veteran James Bates.

Whitesburg’s Fourth of July celebrations also expanded under Craft’s administration and were huge spectacles with well-known bands packing the Riverside Park with celebrants and a $15,000 fireworks display. Though the concert was not held last year because of the pandemic and will not be held this year for the same reason, the fireworks show will go on Sunday night.

The city also began closing Main Street for special events and turning it into a pedestrian walkway, drawing huge crowds for live music and other festivities.

Whitesburg’s decorations for Christmas and other holidays were also greatly improved after Craft took office. His efforts at beautifying the city have also brought about the hanging of live flowers on nearly every utility pole in the downtown area.

In August 2019, Reader’s Digest named Whitesburg as one of the “25 Most Stunning Mountain Towns in America” on a list that also included such well-known travel destinations as Aspen, Colorado, Sun Valley, Idaho, and Asheville, North Carolina. The Reader’s Digest honor came just a year after Blue Ridge Country magazine also saluted the changes Whitesburg had made.