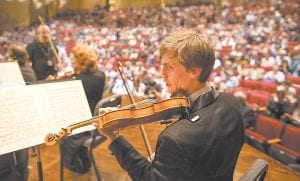 Whitesburg Mayor James Wiley Craft on Tuesday night called on citizens to turn out for Thursday night’s performance by members of the Lexington Philharmonic Orchestra, who will give local residents the rare opportunity to stay in Letcher County and hear musical selections from Beethoven and Stravinsky performed live. Craft said the performance would also give residents the chance to show their appreciation to the Levitt Foundation for providing the community with 10 free concerts.

Mayor James Wiley Craft is asking that as many people as possible attend this week’s free concert in downtown Whitesburg to help the city show its appreciation to the Levitt Foundation.

This week’s Levitt Amp Concert at Mountain Heritage Village on Thursday night will feature a string quartet from the Lexington Philharmonic Orchestra. In addition to the quartet, representatives of the Mortimer & Mimi Levitt Foundation will be in Whitesburg to see the show, one of nearly 500 free Levitt concerts now taking place here and in 25 other towns and cities across the U.S.

Whitesburg was chosen to receive a $25,000 grant from the Levitt Foundation for presentation of the concerts after the city received the highest number of votes of any of the participants in a national contest to determine the final 15 presentation sites. This Thursday’s show will begin at 6:15 p.m. with a performance by Letcher County resident Nate Polly, whose new album, Headed Back, was released recently by June Appal Records in Whitesburg.

The string quartet will appear after Polly and play music by Beethoven, Stravinsky, and Dvoák’s American String Quartet. The four visiting musicians — William Ronning (violin), Anna Czerniak (violin), Austin Han (viola), and Phillip Goist (cello) — will provide some historical background and note “things to listen for” about each work during the performance. Following the performance, the audience will have the opportunity to interact with the musicians.

In a related matter, Craft said he was extremely pleased with the way the city’s Independence Day celebration went off. The event was held at River Park on Saturday, June 30, because July 4 fell on Wednesday. Craft said it was a tremendous success.

“I was thrilled with the outcome of the event,” said Craft. He went on to say that headline act Carlene Carter still sounded as good as she had when she began her recording career in the 1970s. He estimated attendance at around 3,000 and thanked everyone who participated. Craft praised Whitesburg Fire Chief Gary Mullins, who staged the fireworks display, for an excellent performance and said the sequencing of the “shots” was perfect.

In other business, Water Maintenance Director Chris Caudill reported that there had been several serious line breaks, including the collapse of a 90-foot section of 12-inch sewer line behind the Letcher County Health Department. Caudill said the line was so deep he had to contract with Greg Hale LLC to do the digging because the city’s excavator wasn’t large enough to reach it safely. He said when the leak, which was over 12 feet deep, was finally located, even with the larger excavator, workers could not find the main sewer line, which he called a potentially troubling issue.

Caudill said the line had collapsed and was full of gravel and other debris, which possibly caused pump failures at the Western Auto lift station, as well as the John High station and the one at the community college. He added that city workers had found a large water leak that was 19 feet deep on Avondale Drive and had contracted with Greg Hale LLC to excavate it as well.

Councilman Mike Jackson said he had spoken with Donna Perkins, who runs the Whitesburg City Swimming Pool, and said Perkins reported that the pool is breaking even for the first time in recent years due to attendance and the number of parties scheduled. He added that Perkins told him she is planning to pursue a grant that will be available in December to install a kiddie-themed “Splash Pad” as an added attraction. Mayor Craft said the city has plans for a splash pad on file in city hall from planning done several years ago by Whitesburg architect Bill Richardson. Councilman Derek Barto added that the grant would be a 50/50 match and the city could probably take care of its portion by using city equipment and city workers to install the splash pad. The council voted unanimously to approve pursuing the grant.

Paul Nesbitt of Nesbitt Engineering, who is working with the city on several water issues and the restoration of the Daniel Boone Hotel, reported that he will present a monthly written activity report to the council that will be included in the meeting packet. He also said that the hydraulic analysis of the Daniel Boone Hotel is underway and said he and Caudill have located most of the old plans and blueprints of the city’s water system, including plants and water lines. He suggested that they be digitized and put on CDs so they can be preserved and installed on computers for ease of access. He said the cost will be $4 a page, but that many of the old pans were hand drawn and the paper they are on is very fragile. Nesbitt said it is crucial that the plans be preserved. He added that engineers from Nesbitt Engineering will begin a survey of the city water plant this fall.