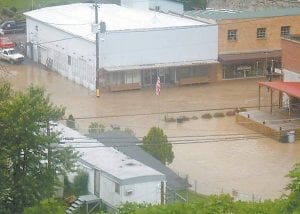 “The creeks just couldn’t hold the water,” said Polis. “Our creeks need to be dredged in the worst way. We have been trying ever since I was mayor of this town to come up with who could do this and we’ve come up with nothing.”

“There was so much rain in one time there wasn’t much we could do about it,” said Ward. “As soon as we heard about the flooding we took all of our equipment up there. We unstopped culverts, bridges and did everything we could.”

“Water just kept coming up and up,” said Miles. “Within an hour roads were blocked.”

Fleming-Neon Police Chief Henry Day said KY 317 from below Welch’s Hollow to Terry’s Trailer Court near Goose Creek was under water. He said the amounts of water varied from six inches in some parts to two feet in other parts. 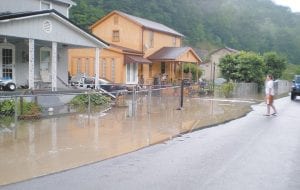 Last week’s heavy rains caused flash-flooding in many areas of Letcher County, including No. 2 Bottom in the Burdine community of Jenkins. Pictured above, Ashley Addington looked over the water that gathered in the yard of her parents, David and Betsy Addington. (Photo by Jessica Anderson)

Day said the Ashland Gas Station lacked 10 to 12 inches of water to be over the gas pumps. He said several buildings, including the fire department, the drugstore, two churches and the Masonic Lodge, were flooded. He said water got to the edge of city hall but did not get inside the building. “Within four hours they had Main Street looking good,” said Polis. “There were a lot of people who helped clean up.”

“We’ve got a lot of debris under bridges,” said Polis. “We are just going to try to clean it up as best we can.”

Day said Yonts Fork and McRoberts were also flooded. Ward said Doty Creek and Kingscreek had wind damage and the electricity was out for awhile. Ward said Craft’s Colly and Sandlick were flooded on June 15. Culverts were stopped up and road work had to be done. 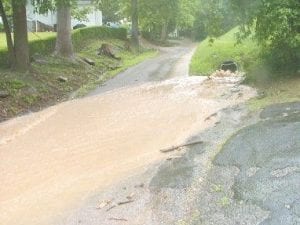 Water rushed from a blocked culvert on No. 1 Hill and onto KY 805 at Burdine last week. (Photo by Debbie Gibson)

“We were in a pretty bad drought last year,” said Schoettmer. “And this year we have for sure defeated the drought.”