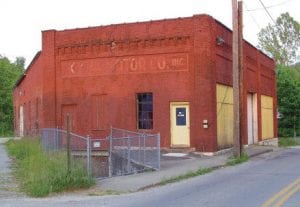 STANDING SINCE 1925 – The sun was setting above the old KYVA Motor Company building in downtown Whitesburg when this photograph was taken early Monday night. The Letcher County Conservation District wants to raze the building and replace it with a more modern facility for its offices. (Eagle photo)

Whitesburg Mayor James W. Craft this week declared a moratorium on the issuance of a work permit that would allow contractors to begin tearing down the old KYVA Motor Company building on Madison Street.

Craft took the action Monday, four days after the Letcher County Conservation District’s governing board voted abandoned plans to renovate the building to use for its offices and voted to tear it down instead.

The KYVA building, built more than 80 years ago, is one of several downtown buildings placed on the National Register of Historic Places last October as part of the Whitesburg Historic District listing. The National Register, which is overseen by the United States Department of the Interior, is the official federal list of districts, sites, buildings, structures and objects significant in American history, architecture, archaeology, engineering and culture.

THE KYVA Motor Company building is located at the corner of Main Street and Madison Street in downtown Whitesburg.

The Letcher County Conservation District is one of 121 such districts in Kentucky. Funded largely by local tax money, the local district has the responsibility under Kentucky law “to coordinate assistance from all available sources – public, private, local, state and federal in an effort to develop locally driven solutions to natural resource concerns.” The local office is governed by a board of “local conservation district supervisors” who are elected to terms by submitting a petition to the county court clerk’s office.

A Letcher Conservation District spokesperson said Monday there is no truth to reports that the building would be replaced by a “double-wide” manufactured building.

“No, we’re not going to do that,” said Brenda Joseph, the only full-time staff member at the local office.

According to Joseph, the local district bought the KYVA building for $85,000 recently after state officials began encouraging local boards to buy office spaces of their own instead of renting. She said the local board dropped plans to remodel the building after learning it would cost about $300,000 to complete the project.

“We don’t have that kind of funding,” Joseph said, adding that local board members hope to model their new office on buildings now being used by the Floyd County Conservation District and the Knott County Extension Service.

According the National Register, the KYVA building was constructed in 1925 and “was the local Oakland, Willis and Pontiac auto dealer and also sold International trucks.”

“This distinctive vernacular red brick building is built to address the oblique corner of East Main Street and Madison Street,” the National Register continues. “Painted ‘ghost’ signs of the KYVA Motor Company remain on portions of the surfaces of the building. The building was erected for Wilson Reniger, whose daughter married Russell Price. Price eventually ran the company.”

The building served as the KYVA Motor body shop after Price later built a new showroom at the end of East Main Street. The newer building was renovated in the 1980’s and now houses the KYVA Medical Plaza.

The original KYVA building is located across the North Fork of the Kentucky River from an old Dr. Pepper bottling plant which was renovated by Appalshop several years ago. Located directly across Madison Street from the building is the old Boone Motor Company, which Appalshop now owns and plans to renovate.

The KYVA Motor building also stands in the line of sight of two other major renovation projects on Main Street – the Home Lumber building which now houses offices and retail space, and the Lewis Wholesale Building in which the Whitesburg City Hall/Fire Department is now located.

Craft said the location of the building alone is reason enough to take the extra time to study what impact the building’s demolition would have on the area. Craft said Letcher County Health Department officials also deserve a voice in the matter since they will also be moving that facility nearby.

Craft said he is scheduled to meet with Conservation District officials on June 4, and hopes to encourage them to exhaust every source of funding before giving up on their original plan to remodel. He said the district already has $100,000 in its building fund and should be able to use that amount to obtain the necessary financing.

The Conservation District had already placed an advertisement seeking bids for the demolition of the building before Craft issued the moratorium. The ad, which appears in this week’s edition of The Mountain Eagle, says “bids for demolition of the old KYVA Motor Body Shop” will be accepted until 4 p.m. on June 11.

Sam Adams, a Letcher County resident who worked to help get the KYVA building and others in Whitesburg listed on the National Register of Historic Places, said the structure “is an integral part of this historic district.”

“The conservation board should exhaust all sources of funding for that renovation before it ever considers removing one brick from it,” Adams said.